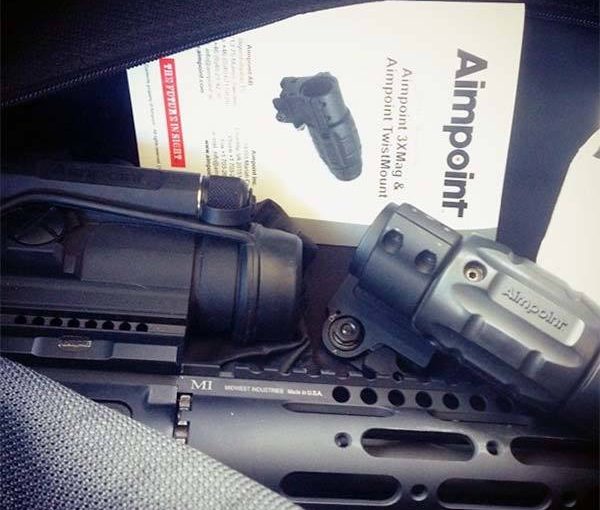 The new Aimpoint 3x Magnifier indeed has built up a following since its release. The overall quality of Aimpoint products in general and the previous Aimpoint PRO, in particular, has contributed to their reputation. However, the Aimpoint PRO does not have a magnified optic which is somewhat limiting. The new 3x magnifier represents a new product for Aimpoint that hopes to correct for this condition.

For those who engage in long-range shooting, having an unmagnified system like the PRO can be problematic when shooting at targets over 200 yards. In fact, the further you get out on the range, the more difficult it can be to sight the target accurately. The Aimpoint 3x Magnifier Module seeks to correct that issue.

Boosting the magnification by a factor of three certainly helps bring distant objects closer to the target. While 3x magnification may not seem all that astounding, mainly because it is a fixed magnification that cannot be adjusted, it does work quite well for many types of targets that are 200 or more yards away from you.

The primary purpose of the new Aimpoint 3x Magnifier is to work with all of their red dot optical systems like the PRO. By overcoming the arguably biggest complaint, this module helps people focus on the target at ranges that go beyond 200 yards to a reasonable degree.

With the Aimpoint PRO, the new 3x Magnifier can be set behind the unit and work efficiently to help bring in far away objects. The compact, lightweight design works quite well in helping people to “spot the dot” at distances that they otherwise could not see.

You can order the new 3x Magnifier with a selection of different mounts. However, Aimpoint has introduced a “twist mount” that makes removing the 3x Magnifier as simple as possible. This means that you can switch from far away to close in targets quickly without disrupting the PRO system on your weapon. All you need to do is press the release button and then twist the 3x magnifier counter-clockwise and lift.

This new twist mount system is undoubtedly a big plus. While the 3x Magnifier does add some weight to the weapon and may block off the rear site, the ability to remove it for close-in targets is a real plus and makes this a highly useful item.

The 3x Magnifier by Aimpoint is undoubtedly very impressive. A simple, straightforward site that helps improved accuracy starting at 100 yards and beyond 200 is undeniably remarkable. While the magnifier cannot be adjusted, its overall purpose is such that it can help improve performance thanks to its faster acquisition of targets.

If you are looking for a way to improve your accuracy using the Aimpoint PRO at targets that start at 50 to 100 yards or more, then the Aimpoint 3x Magnifier is undoubtedly the right product for you. It’s simple, it’s useful, and it performs under many different environmental conditions quite well thanks to its design and sturdy construction. It may not be that cheap, but it is quite useful at what it does.