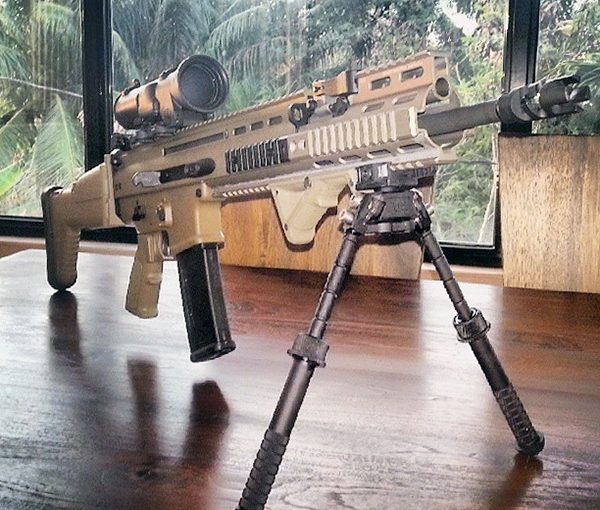 Since 1997 Accu-Shot has been designing and constructing mono-pods for all types of precision rifles. What follows is a breakdown of the current V8 Bipod system

Once the Atlas Bipod is matched with the AI Spigot, which is a very quick installation, the first thing that you notice about the V8 is the positioning of the legs which is superior to most models. This is because the Atlas Bipod allows each leg to be placed independently with just the push of a button.

Plus, you can stow the legs to the rear as well to make it a low profile version that will lay flat against the chassis, removing the issue of bipod catching on brush and the like only to swing open. With the legs folded, the rubber feet actually provide a little cushion. This can actually help if you are firing on some type of makeshift platform as it steadies the rifle.

A 20” barrel on the AE MkII will allow you to extend the legs fully and place the feet under the muzzle for maximum stability. In fact, it’s possible to place the rifle near a window sill and not have the muzzle protrude which can offer advantages in stealth when competing on an urban setting.

With the legs at 90 degrees, it places enough flexibility to place forward pressure on the rifle for maximum efficiency and to absorb more recoil. The Atlas allows for a 15 degree pan either left or right as well as cant.

It does take a little practice to deploy the legs, although it is rather intuitive in nature. The locking collars and lower portion of the legs are heavily knurled for a better grip in virtually any environment. Plus, if you need to deploy the legs immediately, simply pull down on the locking collar and extend them fully or stop at any point. Release the collar and the pressure on the foot will cause it to spring back and lock. Such a deployment will naturally be imprecise, but it does have the advantage of speed.

A precise adjustment will require gripping the leg with three fingers while pulling down the collar with your index and thumb. This way, you can set the length and then release. It takes a little more time, but it gives you more control. The Atlas Bipod/AI Spigot combination, the collars are nearly perfectly made as they lightly sit on the skins when stowed. This is a wonderful design that simply works to near perfection.

The Atlas Bipod vs. the Harris BRM-S Bipod

Comparisons between the two are natural. While the Harris Bipod is certainly more popular, it does require the addition of the KMW Pod-Lock which prevents the BRM-S from rolling to either side. The Atlas Bipod uses a simple tension wheel instead as the cant and pan comes from a swivel ball joint in the middle of the bipod. In essence, the design of the Atlas Bipod will allow you to leave a little play if you want while the Harris does not provide such a benefit. It is true that if you repeatedly track back and forth, the wheel itself might loosen but that is a small matter.

Is the Atlas Bipod a better option than the Harris? That is a tough call because the Harris does bring some hefty advantages. If you need to start with the bipod in a closed position, then the Harris has the edge. However, in virtually all other situations the Atlas has the advantage especially when precision matters. If this is more to your liking, then the Atlas Bipod is the one to get.

There is certainly some merit to the AI Spigot Adaptor as it does offer a tremendous design and the current model the Version 2 adds an additional device, a tension knob to the spigot itself. When you install the adapter into the AI Spigot mount, you can feel some play in the device. By tightening the tension knob, you can completely eliminate any of that movement so that the Atlas itself will control all the cant.

The threaded holes on the AI Spigot Adaptor on both sides of the item will accept Picatinny accessory rails. Of course, you can leave the rails off if you want depending on the type of shooter that you have developed. If you would like to use the Atlas on other, non AI platforms, then you can employ a simple solution. Instead of mounting the Atlas to the bottom of the Spigot Adaptor as you normally would, you can instead use one of the rail clamps and then install a Picatinny section to the bottom of the Adaptor  which will allow the device to be used properly. Now, you can quickly switch the Atlas on to any rifle that is rail equipped. Accu-Shot has created a rail section that will mount to an AI Chassis handstop slot if you want to mount a clamp-equipped Atlas to the AI Chassis itself.

If there is any drawback to the Atlas Bipod, it is that no sling swivel stud mounting option exists as of this time. If your rifle is stud-equipped, then you will need to install Picatinny rail section on the bottom of the rifle in order to allow the Atlas to fit. There are several companies that include Accu-Shot which have created rails just for this purpose.

The Atlas Bipod is certainly a very impressive bipod that is worth obtaining if you are a precision shooter.