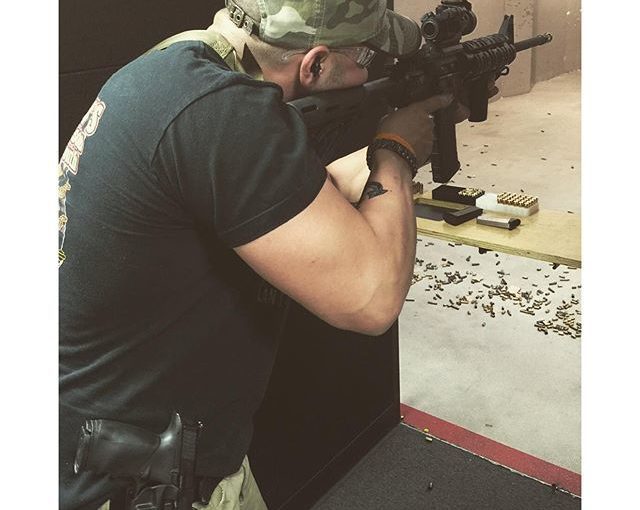 As the owner of an AR-15, congratulations, you own a rifle that is one of the most popular in the nation. It is also an accurate, light-weight, air-cooled, semi-automatic weapon that comes in either carbine or rifle that can hit targets with the same precision as bolt-action weapons.

Before you can become a marksman with the AR-15, you will need to follow a few safety rules.

Next, you will want to head off to the shooting range armed with your AR-15, a small spotting scope, and shooting mat along with your rifle bag. You’ll want to learn how to zero the rifle’s sights using a front sight adjustment tool and print off some targets to take with you to the range.

There are a considerable number of variables when it comes to the accuracy of your AR-15. The overall quality of your rifle, the ammo used, wind, and other factors will play a role. However, it is human error that is usually the biggest factor. Here, you will need to follow the basics.

Basically, you must do the same thing each and every time in order to make sure your rifle is accurate.
Get to Know the Sights

The iron sights of an AR-15 are very well crafted. In most cases, your sights will consist of a small opening for precision shots and a large opening designed for fast shooting in low light conditions. You’ll be working with the small opening for accuracy as it increases the depth of field and suppresses errors in parallax.

So, focus on the front sight to increase the depth of field which will result in a clearer view of the target. Remember to keep your other eye open when firing to notice any difference in your target and reduce parallax errors. Now you are ready to squeeze the trigger.

Pulling the trigger correctly is essential to accurate shooting. With the sights lined up, a smooth squeeze ensures that the rifle remains on target when the weapon is fired. Pulling or jerking the trigger will cause the bullet to go off-target. You will want to start dry firing first to get used to the pull of the trigger so that it does not disrupt your aim at the target. The more you practice, the better you’ll be at the shooting range.

If there is an issue with the trigger, you’ll want to have that checked and cleared before taking it out to the shooting range. However, if it squeezes properly, then you are ready for the next step.

Your breathing will affect the aim of the AR-15 as the movement of your chest will make subtle changes to the position of the rifle. This means that you will want to breathe normally and fire when you have reached a natural pause. Trying to hold your breath will increase the heart rate and cause more movement that will disrupt your aim. So, it is all about timing when you aim your AR-15 and you will need to understand how body mechanics work in the process as well.

Shooting while prone is the most stable position for the marksman unless you have some type of stable platform from which to fire. The prone position means less muscle fatigue and fewer body movements because it is a very relaxed position. The USGI web sling will actually add support to the rifle while causing fewer twitches in the muscles when firing. Remember to spread out your legs until you are fully comfortable, rest the forearm of the rifle in the palm of your non-shooting hand. Plus, the butt-stock should be tucked into the pocket of the shoulder. Your eye, nose, and cheek should all be in a comfortable position to properly aim your AR-15.

When ready, you should be using the natural point of aim that is created by the combination of your body position, the rifle, and your eye which is looking through the small opening of the front sight.

You can achieve a natural point of aim simply by closing your eyes and letting your body relax until the rifle drifts into position. Then, open your eyes to see if the rifle is pointing at the target. If not, then move your body until the rifle does point at the target.  This action will take away human error when firing because you are not fighting your body position when aiming.
Your focus should be on the front sight so that it is absolutely clear and on target. Squeeze the trigger properly and if the rifle recoils and falls back into the same position which naturally points at the target, you are doing things perfectly.

One recent innovation is the use of red dots that illuminate where the rifle is aiming. This gives you a visual reference to whether your aim is true. Simply place the red dot on the center of the target and go through the same motions as if you were aiming with the iron sights.

Using the 2 MOA dots will mean a sharper aiming point as compared to your front sight and they will not obscure the target nearly as much. Dial down the intensity until you get a sharp, clear red dot that you can see and then fire when on target.

To become a marksman with your AR-15, it is simply a matter of repeating the fundamentals until you are naturally inclined to fire the weapon in the proper manner. Get into a stable shooting situation, align your body properly, breathe normally, and then squeeze the trigger when you have reached a natural pause in your breathing.
Remember that practice will make the best marksman when you repeat the fundamentals of good shooting. The more you can practice, the better you will become at aiming your AR-15.