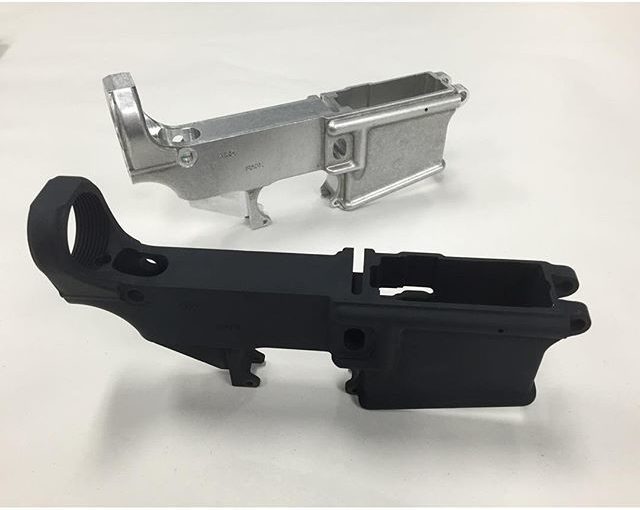 What is an 80% Lower Receiver?

Of the many different pieces that make up a rifle, the only piece that offers a serial number is the lower receiver. You can legally purchase a finished receiver from a licensed firearm dealer as well as getting one from a private party transfer as long as there is some type of FFL. The FFL should be stamped onto the receiver which indicates where it was originally purchased.

However, an 80% receiver is not considered a firearm by the federal government and they can be sold without a control or FFL number until they are finished out as a firearm. One you drill out the fire control pocket and assemble the weapon, your 80% receiver is then considered a full firearm. Unless your local authority has rules to the contrary, there is no requirement to add a serial number or register the weapon. This means that you can build it and do what you want with the firearm you constructed just as if you would with one that you purchased and registered.

There are obvious benefits to having such a weapon such as if you are worried that the government will come and take what you have based on the guns that are registered. However, there are other scenarios where building your own rifle will be advantageous.

The ATF uses a program called eTrace which lets them track a weapon from the point of sale to wherever the firearm currently is owned. This helps law enforcement agencies solve crimes based on who controlled a firearm at a certain point. However, this database is being shared by over 50 countries which mean that your privacy could be threatened. In addition, the NRA has also been putting together a list and they are a private agency.

Recently, there was an uproar caused by apps that were being created on smartphones which allowed anyone to access the locations of where firearms were registered or suspected of being present. So, in order to sidestep such issues building your own rifle with an 80% receiver can evade having your weapon registered with government and private agencies that could be hacked by those with less than noble intentions.

The founding fathers placed particular importance on the ownership of weapons by private citizens as it is part of the Bill of Rights. All amendments are considered equally important which means that at this time it is still legal to build your own firearm. Recently, SB 808 in California was a measure designed to control the building of personal firearms which was resoundingly defeated.

Today, building your own rifle is similar to constructing your own car, plane, or house. There is something noble and satisfying about being able to build something from the ground up. It is a cornerstone of survival skills and it will allow you to be fully prepared in case the situation in this world takes a drastic change. Plus, you can better understand how firearms work when you build one from different components. You will have to use your skills and knowledge to choose the right parts for your rifle and then put them together in a manner that results in a safe, usable firearm.

Of all the platforms for 80% receivers, the AR is one that is arguably the easiest for those who are just beginning in this field. A company called Iconic Industries Inc. for example offers 5.56 80% receivers that have all the integrated features which make them a good choice. Their product features front magwell grips, flared magwell, and modular retention. This means that you have the starting point for your AR rifle that can be completed with the right instruction.

There are many different videos and instruction guides on the internet for building an AR rifle. You can choose from many different platforms as well, such as the 117 Stealth models which can be matched with the VLTOR/KAC Upper that a gunsmith can assemble for you. However, you can install the trigger/hammer group and complete the project on your own so that you have your very own, legal, off the registration rifle that you can use when needed. you can also look at other 80% lower receivers that include the .308 Instigator which is quite popular.

The Time is Now

If you are considering building an 80% lower receiver into a rifle, then the time do start is today. At the very least you can purchase the receiver you want and keep it until you are ready to build your own rifle. While the laws right now allow for those who want to construct their own rifle from 80% lower receivers are still on the books, times can change which may make such purchases a thing of the past. So, you will at the very least want to get the basic materials, tools, and machinery needed so that you can start when you want.
Remember, it can take time to get all the parts that you want, plus the equipment needed to assemble your rifle. Plus, you’ll want to have spare parts and equipment just in case something goes wrong. Finally, you’ll need a place to test fire your new rifle so that you’ll know everything works properly. If this is going to be the only weapon you have around your house, then you’ll want to be sure that it works correctly and you have the spare parts needed to keep it in shape over the long run.

Today, it is perfectly legal to build your own rifle starting with an 80% lower receiver and keep it off the government and private agency’ books. However, if the times were to change which makes owning and building a rifle more difficult, you’ll want to take the preemptive step of having the receiver and the necessary parts, tools, and equipment ready to make what you want on your own.