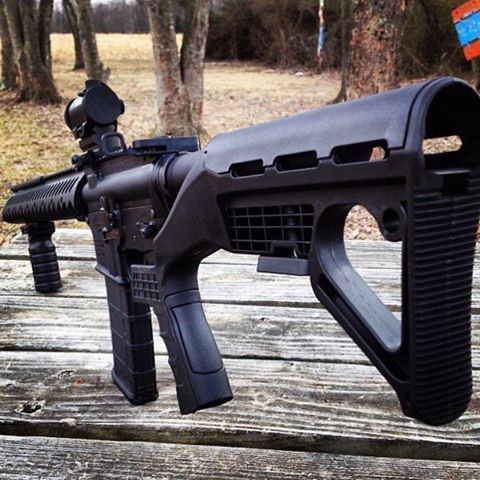 There are different types of people who purchase guns. Some want to acquire a weapon strictly for defensive purposes as they also get some ammunition, a couple of magazines, and then leave it alone until the gun is needed. There are others who will purchase the latest and greatest firearm, variant, or accessory as soon as it becomes available. The latter are those who support a considerable industry that is dedicated to putting out the latest, but perhaps not the greatest firearm, variant, or accessory as it does not last long on the shelf regardless of its quality.

Of course, there are also the operators who actually use the weapons, ammunition, and accessories that they purchase on a regular basis. However, most people would fall into the average category that enjoy keeping around a certain number of weapons while not having so many items that it becomes a burden. However, there is an emphasis on purchasing the right accessories to upgrade their weapon.

Replacing the bolt release lever, adding new optics or getting a collapsible stock are common ways to make improvements in the AR-15 that people do on a daily basis. Naturally, there are many different companies that have created different accessories for the AR-15 that range from usable to boring to spectacular depending on the needs of the user. There are different manufacturers in the mix as well from Lancer, Magpul, Tango Down, Cammenga, Troy, and many, many more. Even companies like KCI HK have created knock-off products that have worked quite well for this weapon.

There are even products that have no clear manufacturer, although they are sold by recognized retailers. Such products often mimic those by other, respected manufacturers and take advantage of loopholes or perhaps missing copyright papers to create virtual knock-offs of certain types of accessories which results in some confusion by consumers who may mistake one cheaper version for another high quality design. However, as long as the product lives up to the promise, then the field is wide open for manufacturers to create magazines, stocks, and a wide variety of items for the very popular AR-15.

There are repeated themes in the information available on the internet when it comes to building an AR-15. Most of the sites focus on the trigger and barrel while everything else is less important. So, getting a good barrel and trigger are paramount when it comes to assembling a proper AR-15 for your needs. The good news is that there are solid trigger manufacturers such as Gessle Automatics which provide solid, safe, and effective triggers that improve the overall performance of the weapon. However, Gessle products are also rather high priced, so there is also triggers made by ALG which is basically a stock AR-15 trigger with a few modifications that sells at a far lower price. Dayton Sports LLC also sells low priced triggers for the AR-15 that are very well made.

Installing a trigger in the AR-15 is fairly simple and straightforward if you have the information handy. However, a gunsmith will do the installation for you at a modest price. Still, if you can use the included slave pin to push the retaining pins into position while holding the trigger and hammer in place, you can replace the trigger on an AR-15.

Once the trigger is installed, you should dry fire the weapon to see if it works to your satisfaction. If you have any doubts, then you should try to re-install it or take it to a gunsmith and let them do the work. The ALG trigger works quite well and with a four pound pull is just perfect as strikes the right balance between being heavy enough to resist quick firing while light enough for maximum control. By allowing this type of balance, the ALG trigger is one that provides plenty of action and will improve the overall performance of your AR-15.

In reviewing the triggers being used, there are other considerations that should be taken into account to ensure that the AR-15 performs up to standards. This often means bringing in other, similar weapons for a comparative test and seeing that weapons such as the Sig 556R for example used to have issues with handling steel case ammunition as well as the metal AK magazines which have now been resolved thanks to an added liner that prevents the aluminum casing from wearing out with repeated use. This means that the Sig 556R is now even more reliable, durable and flexible when it comes to the ammunition and magazines that it can take.

All in all, many of the new accessories available for the AR-15 work quite well, particularly the trigger which you can get at a low, reasonable price and install it yourself. For those who are looking at making improvements to your AR-15, keep in mind that you don’t have to pay a lot to get a lot in terms of quality, durability, and effectiveness.