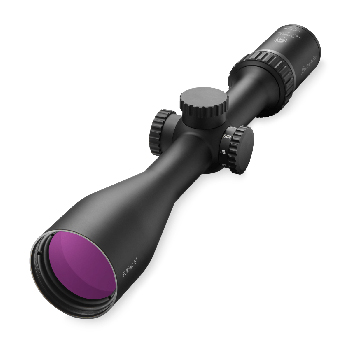 The shooting world is well supplied with scopes that see the backside of Saturn, scopes that inform you the exact distance to the target, and scopes that cost $2, 000. But where are the sound, versatile hunting zoom offering a reliable pointing point on a bright, sharp target image that does not require a mortgage to purchase? Burris has some. Yep, Burris has all the bells and whistles in their line, however, this Colorado company has for ages been about a sound, reliable product at a fantastic cost scope an American hunter can rely on. Its bread and butter line is the all American, 1 inches tube Fullfield series.

New to this line is the E1. According to Burris advertising claims, the E1 scopes are not so much radically new as upgraded with a sleek profile, gnarly turrets and incorporated power ring. I am not sure what incorporated means here, but I see new E1 magnification ring turns without the whole eyepiece turning with it as on my older Fullfield scopes. Additionally, in place of the small, finely checkered ring of the older Fullfields, the new magnification ring protrudes slightly higher with deep, longitudinal grooves. I do not find these provide any more grip than the old style, but they look high technology and gnarly.

Thus making the new turret caps, which game the exact same deep grooves. These make the turrets seem as though they’re adjustable. Turns out they are just caps that have to be removed to get the windage/elevation adjustments beneath. My interpretation: shelf appeal. People want a sniper look and that is it. Beneath the brassy caps, the turret knobs prove very functional with deep friction grooves that make fingertip adjustments quick and easy. As long-range shooters that choose to dial-in know a scope must dial just to be able to be used this way: a quarter click must equal 1/4 MOA.

I did not Push my sample E1 into the far limits, but when I dialed 16 clicks down, the scope correctly places my next shot 4 inches beneath the prior. Then I fired rounds whilst scope has been set on 3X, 6X, and 9X to see whether any setting would slide stage of aim off center. Shots in 3X and 6X entered the exact same hole. Shots at 9X landed an inch off. The rifle, a Savage M11 in 6.5 Creedmoor, was 1 inches gun, so this scope did its job.

The one Thing completely new in this Burris Fullfield E1 Rifle Scope is it’s Ballistic Plex E1 etched reticle with windage compensation aiming dots. As with plex reticles, the outer wires step down to thinner lines near the center, however this time with a visible gap in the joint. The bottom vertical cable is intersected by four brief horizontal aiming points. Dependant upon magnification and individual bullet trajectory curve, these represent direct pointing points. With one bullet\/muzzle velocity with the scope set at 9X, the third bar down might match the strike at 435 yards. With a different bullet\/muzzle velocity it might represent a 375-yard point of impact.

This is a classic performance with a multi-reticle in a second focal plane scope. The 2nd focal plane ensures that the reticle doesn’t enlarge, or get bigger, as the power ring is turned. Most shooters use such reticles at top power since they are more than likely to need those aiming lines when they simultaneously need the highest magnification. Burris offers recommended tables to match the trajectories of popular cartridges and bullets, but users who want to be precise are invited to test and transform them by actually shooting at distances up to 500 yards. Burris has thrown in windage compensation aiming points on each side of the sub reticles.

These discreet points represent the deflection of an average hunting bullet in a 10 mph, 90-degree angle crosswind. Clearly, The further down the Christmas tree of reticles, the further on the sides these points are placed. Burris claims they’re accurate in plus or minus 1.5 inches at 400 yards. I prefer this style of multi-reticle since An expanding line of points makes it simpler to count down and differentiate sub reticles, preventing over- and undershooting. The only thing better is small numbers beside each sub reticle, but Burris wanted to keep this one clean. One of the unusual features of this grid is its floating nature.

The crosshairs don’t extend completely across the field of view. I think this is very intriguing because it definitely reduces clutter. You do not need an external fringe of the crosshair. The only reason it’s ever been there’s because the traditional reticles were built from spider silk or fine threads that needed anchor points on the hub. Etched reticles don’t. The downside is the floating reticle is a challenge to level since there are not many lines to eyeball against external reference lines. It is best to use a double bubble leveling system when mounting your oscilloscope. The E1 is guaranteed dustproof, fogproof and waterproof. To test this claim I froze and dunked it, and I was surprised to see no internal fogging after the freeze dunk. This is the first scope that did not have any internal fogging after this trial.

More critical to me is image quality, and I liked what I saw in this scope. It’s advertised as indicator matched lenses with Hello Lume Storm multi-coatings. Which means that an engineer has matched the refractive index of the assorted lenses inside the range to get optimal functionality and a minimum of one of the lenses has several layers of anti-reflection coatings. The layers of anti-reflection coatings on each lens surface, the more light it communicates, but no provider tells us the number of layers it utilizes. Usually, the term fully multi-coated optics means every surface becomes multicoated.

Leave the word entirely-as the catalog lists the E1 and it could indicate only one lens gets muli coated. Given that Burris advertises its high priced Black Diamond scopes as fully multi-coated along with its own low-priced Timberline scopes as with Hello Lume coatings, so I figured that a few lenses at the Fullfield can have, but one coating layer. But Burris PR man assured me the E1 is fully multi-coated. Flare was beautifully controlled within this scope. I discovered virtually none while looking at the setting sun. Images from the shadows remained clear, sharp, well defined with lots contrast, suggesting whatever anti-reflection coatings Burris utilizes are doing their job.

In addition, all controls are firm and smooth. Even the fast twist eyepiece focus adjustment was tight and not easily bumped off. Preferably I would like to see resettable turret dials on this scope. And that I really could do without the bulky, gnarly eye candy turret caps. In 13 ounces this is a fairly light range ideally suited to the majority of purpose rifles we American seekers like to take. Everything from jumped whitetails in heavy covers to coyotes on the far side of the wheat area, the E1 should manage it. Burris scopes are famed for holding and durability zero. With its double erector spring, the E1 should be no different.