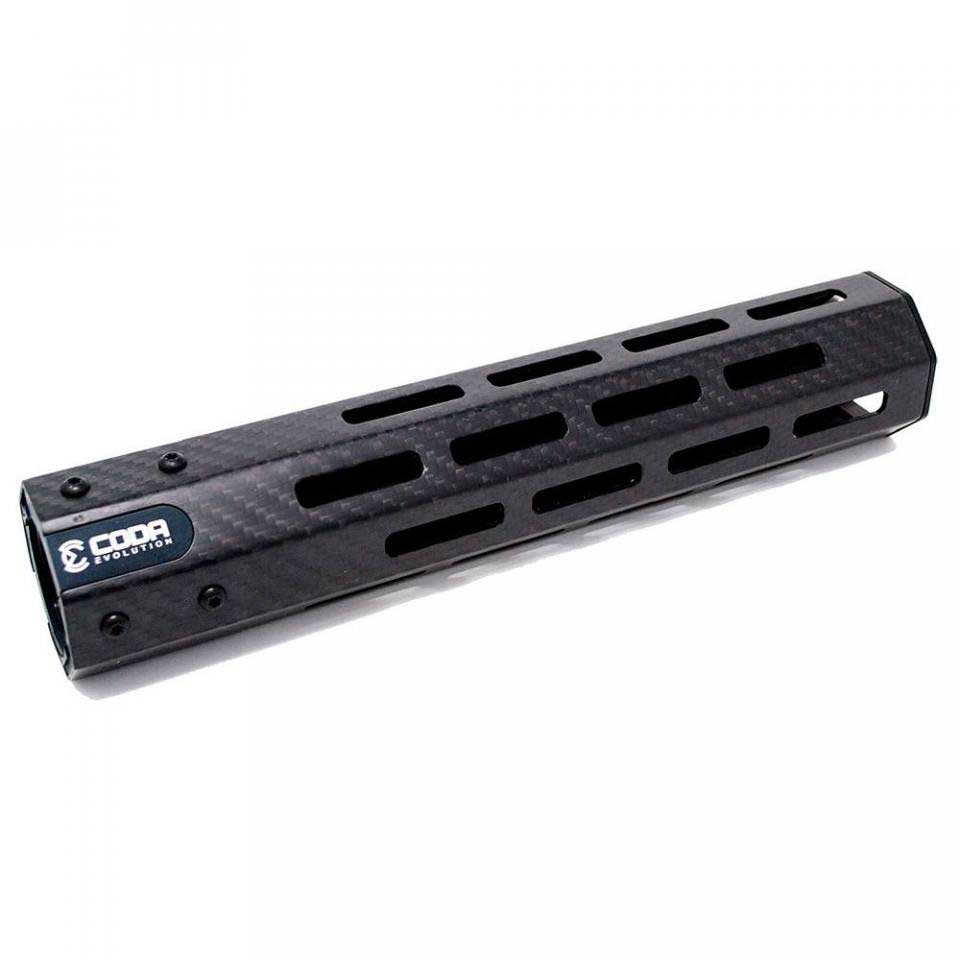 I bought this because it was cheaper than the Faxon CF AR-15 handguard and actually in stock. I was pleased to find that it is also a very sturdy and nicely finished product, while also being extremely light. Installation was easy, just needed a 1-1/4 box-end wrench instead of an AR armorer’s wrench for the barrel nut. My only suggestion is that the instructions be changed for the initial disassembly of the barrel nut and trunnion – using a wooden dowel works, but is a bit of a pain.

I love this handguard, worth the money and good quality. I was very hesitant about buying carbon rail over a metal rail, but it’s very rugged and looks great! I had two small scuff marks at the very front of my track in the metal part. Code Evolution immediately apologized and sent my pictures to their engineers to fix the problem. Excellent customer service and fast response! An, they even gave me suggestions on how to fix the small scuff marks.

I purchased this carbon fiber handguard for my What Would Stoner Do (WWSD) rifle, and I couldn’t be happier. I like how there aren’t tightening bolts at the rear that protrude out the bottom. The slim profile doesn’t hang up on gear, and the trunnion area takes longer than anticipated to get hot when doing mag dumps. I have this handguard paired with a Criterion ADM contour barrel with a 0.750 gas block and a Superlative Arms .750 Adjustable Gas Block. There is enough room for everything to fit nicely without force. I would recommend installing this handguard with a friend because it’s a little hard to tell when the top is square/parallel with the top of the upper receiver, and having a second pair of eyes is helpful. Lithium grease is very helpful, too, when installing the trunnion assembly also. Overall I’m thrilled and satisfied with my purchase, and I wouldn’t hesitate to buy another American made carbon fiber handguard from Coda. Thank you for manufacturing excellent products!

The handguard is very lightweight and well built. The only reason I am giving it four stars instead of 5 is that I’m my opinion it would look cleaner if the screws used to secure the handguard to the barrel nut were tapered heads that when tightened we’re flush with the handguard instead of the Panhead screws provided

No continuous m-lok slots at the 12 o’clock position just two of them, I doubt it’ll be enough to mount both backup front site post and a peq 15… The instructions are unclear on how to get the nut, trunion, and handguard separated, I tapped the trunion/nut out with a 1″ dowel inserted from the front end, then took off the three Torx screws holding the trunion to the nut then screwed in the nut to the barrel hand tight used a flat head to separate the opening slot to the trunion and pulled it off by hand. I have no idea how to torque down the barrel nut using my torque wrench as my armorer tools are meant for MIL-spec barrel nuts… Hope this helps, really disappointed in there not being continuous m-lok slots on the 12 o’clock position

Best carbon handguard on the market

I chose this handguard primary because of the octagonal shape, which fits my hand perfectly. It allows for the attachment of accessories without compromising where you can place them, as it has M-LOK slots along every flat edge. It’s incredibly light, easy to install, and looks fantastic. Don’t change anything with this product.

OK, guys. Use common sense here. Follow instructions and get everything lined up for yourself then torque down. If you find it’s not straight, don’t panic.. the fit is tight, what you want, but will come free. I held mine in one hand and tapped end of barrel with old flash hider on with rubber mallet laying across my knees . Lots of little taps and it does come free. Pay attention, assemble again, and you’ll be a happy camper. I am. The weight saving is phenomenal. I’m buying another. I love this thing; you will too. Thanks, Coda Evolution. Fabulous product and excellent customer support. Thanks again, Joseph P Moore

Love the configuration of the mlok slots, the mounting system is excellent as well, but you’ll need a rubber mallet and a wooden dowel/broom handle to make this easier. Using taps from the hammer makes separating the barrel nut assembly from the AR-15 handguard, and the trunion from the actual nut after, much more comfortable than any other method without leaving marks or marring your stuff, reassembly is made easier the same way, taps of the mallet will align the trunion and seat the handguard with ease.

As far as function, I’ve mounted some mlok attachments to it, and they feel solid, the height of the rails is also standardized, I was able to put a kac micro mlok sight, and it lined up perfectly with a Magpul mbus pro offset sight on the receiver in back. Four different manufacturers, one for each sight, the handguard, and upper receiver, yet they all work together just fine for the height and angle of the offset sights.

Honestly, i like this better than the Faxon one; it’s slim and maintains the profile to the mag well, unlike the Faxon, its also a better color/finish and less glossy than the Faxon. I can’t compare build quality, but I’ve examined the Coda one under a lens to see the integrity of the mlok slots and what the interior surfaces look like, and it looks top notch. The unfinished interior has 0 defects and minimal blemishes and the exterior has 0 flaws, and all the mlok slots are cut cleanly.

Light as a feather, solid as a rock.

Where to begin? The AR-15 handguard came in great packaging, with everything you need. I was a bit dubious about how stiff/stable this would be, given how close it is to my gas block, but I couldn’t bend the handguard to hit it, while fully loaded on a bipod. Sub $300, m-Lok, and stupid lightweight? Do not regret it at all!

The manual says getting the AR-15 handguard is a tight fit on the trunion, and they were not kidding. I called and asked about it when I was installing, and the owner called me back within 20mins on his cell, after business hours. Great product, fantastic customer service. WHEN I build another rifle, totally coming back for more!