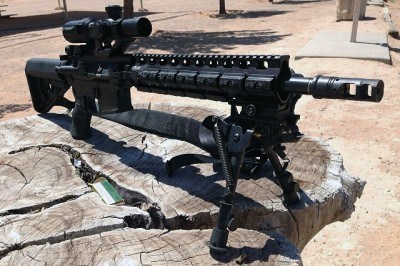 The AR-15 is certainly one of the most popular semi-automatic rifles around thanks to its reliability and performance. It’s little wonder that many people who own AR-15s spend a considerable amount of time with the rifle understanding just how it works, practicing, cleaning and even finding ways to personalize it as well with aftermarket parts.

Tricking out an AR-15 is relatively easy and can add to the overall enjoyment of having this rifle as part of your collections. The number of interchangeable parts along with the relatively simple manner in which the rifle is assembled means that it is easy for nearly anyone to accessorize it to fit their own personal needs.

In fact, many people who purchase this rifle arguably have plans to make it their own even before it gets inside their front door while others build their AR-15 from kits with components right from the start. Even the small changes get noticed on a superior rifle like the AR-15.

What follows are some of the most popular ways you can augment and personalize this rifle to fit your needs and individualize it to your tastes. You may use one, some or all of the following recommendations to improve your AR-15

Nothing says it’s your rifle like a new stock that is built especially for the weapon and creates greater overall control and handling. This is one of the most popular aftermarket parts for the AR-15.

A proper muzzle device will lessen the flash, control the recoil and suppress the overall sound the AR-15 makes when in use. Longer barrels will have the threading for a muzzle device to be attached.

It’s amazing what a new trigger can do for the overall performance of your AR-15. A high quality trigger adds much in the way of controlling the rifle as you fire it at the target. Thankfully, installing a new trigger on the AR-15 is simple and does not require a gunsmith to make the change.

Along with a new stock, getting a new barrel for the AR-15 will depend on what your use is for the rifle. You will need to look at the profile, length, twist rate, cartridge chamber and chambering and barrel lining to find the one that best fits your needs.

If there is a less popular feature on the AR-15, it is the standard A2 pistol grip that is used. This piece o hard plastic has a knot that often bumps into the middle finger making it even more annoying and is often too small for large hands. However, there are plenty of new grips available from respected manufacturers and provide the comfort you need when firing your AR-15.

Whether you hunt or competitively shoot with your AR-15, there is optics out there that will fit your needs. Optics are expensive, but they are also very well worth it to gain all the advantage that the AR-15 can deliver. Don’t skimp on cheap optics, buy the one that will actually do you good.

Shooting with iron sights may seem rather archaic in today’s modern world, but learning how to properly use iron sights is part of the fundamentals of shooting any weapon. Today, there are many aftermarket iron sights that are actually made from steel or even aluminum that will last for many years and provide the best backup when your scope is not needed.

These are most likely used by competition shooters and work well for right and left handed shooters. They are quite handy during competition firing for several reasons, especially when having to shoot from a variety of positions and running around the course. This makes it easy for range safety officers to know when your gun is in safe mode from a distance as well.

Good charging handles are lightweight and cheap, but may not be the best trick-out for your AR-15. That’s because they are tough to use when wearing gloves and not well suited for left-handers. Plus, there are those that claim charging handles are outdated. However, for those who swear by them they are highly effective in many situations.

A relatively obscure modification, these pins are used on the lower parts of the AR-15 to prevent rotation from occurring on trigger group pins leading to wear and expanding the holes in the lower receiver. Anti-Rotational pins prevent that from occurring.

A free floating handguard helps you increase the overall accuracy of the weapon and properly transfers the stress thanks to the solid mounting point. This is one of the best modifications for competitive shooting.

The cheap alternative to expensive night vision goggles is lights that illuminate the target after dark. Lights are inexpensive, simple to attach and will mount well to a free float rail system making them the perfect addition.

Some people may not be aware of the advantages that nickel-coated bolt carrier groups bring to an AR-15, but to those who use them they increase the overall reliability and function when dirt and debris get into the rifle. This can be handy when shooting for extended periods without cleaning the AR-15.

The receivers house the mechanics of the AR-15 and offer a point where other parts are connected. The upper and lower portions are needed for this to work properly.

If you are on foot with your AR-15 for extended periods of time, then you’ll appreciate the sling. Having a sling can be a real effort-saver and helps keep your arms, hands and fingers rested instead of carrying the rifle over distances.