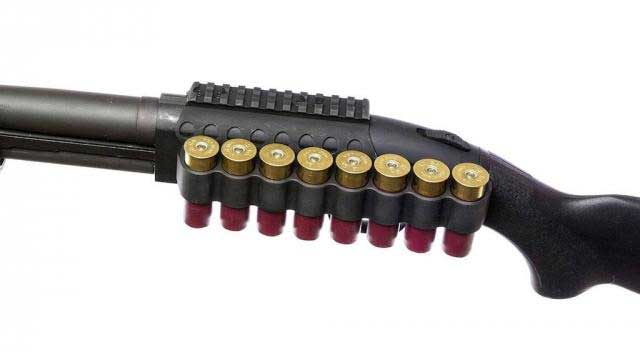 Mesa Tactical SureShell Side Saddle Aluminum Shotshell Carriers with Rail combine a shell carrier with a MIL-STD-1913 (NATO STANAG 4694) Picatinny rail that accepts optical, sights, lasers or accessories. These shotshell carrier/rail systems mounts by using the drilled and tapped holes on top of the shotgun’s receiver.

The Picatinny rails are machined from aircraft grade 6061-T6 aluminum, which are mil-spec hard anodized and provide an extremely durable non-glare matte finish. The basic saddle rail design provides a robust mounting platform suitable for mounting a variety of optical sights, while a second version, which is nearly identical to the basic version, also includes a Mesa Tactical four, six, or eight shell SureShell shotshell carrier mounted on the left side of the receiver. Both versions are manufactured in compliance with MIL-STD-1913 Picatinny specifications, and no gunsmithing is required for installation.

The principle difference between one model of SureShell Side Saddle and another, aside from capacity, is the backing plate, which is designed to mount the carrier assembly on a particular model of shotgun. Side-mount Mesa Tactical SureShell shotshell carriers for Mossberg , Remington and Benelli M1 shotguns use the trigger group pin holes to secure the assemblies to the weapon; the Benelli M2 Tactical, Benelli M4/M1014, Benelli SuperNova Tactical and some Mossberg 500/590 versions take advantage of the factory-tapped rail mounting holes in the tops of these shotguns and include integrated Pictanny optics mounting rails; another version with an integrated rail is the saddle-mount design for Remington; SureShell Carriers for M4 SOPMOD stocks feature special hardware for attachment to these buttstocks; Adapter Mount SureShell shotshell carriers are designed to be attached to Mesa Tactical Telescoping Stock Adapter accessory mount points.

Factory shotgun forends, except “tactical” forends, often feature significantreceiver overlap when the bolt is pulled back. These forends will need to be cut down or replaced with aftermarket “tactical” forends to be used with some SureShell shotshell carriers. Before you install a SureShell shotshell carrier, measure your forend’s receiver overlap and compare it to the furthest forward point of the shotshell carrier. Then cut any potential overlap or interference off the end of theforend with a miter saw or a rotary arm saw for a perfect fit.

These SureShell aluminum shotshell carriers for the Mossberg 500 and 590 feature mounting brackets with integral top Picatinny sight rails. The brackets are secured to the weapon using the top mounting screw holes found on Mossberg 500 and 590 shotguns made since 1997. The SureShell aluminum shotshell carriers are thus slung on the left side of the receiver, securely fastened at the top.

The 20 inch rails are anchored at the front by a magazine clamp that features either a short length of Picatinny accessory rail at the bottom, or a sling swivel stud. The front clamp interferes with the barrel lug on 18 inch Mossberg 590s, and so are incompatible with these platforms. Twenty inch Mossberg 590s fit just fine, however.

No other shell carrier mounting method is as secure or looks as good. No gunsmithing is required to install the SureShell Saddle Rail, except for optional forend alterations as described above. Picatinny Rails are also available without the shell carriers.

The distinction between inferior quality and premium Mossberg 500 Side Saddle is undeniable. At MSP, we only offer Mossberg 500 Accessories from the most trusted brands like Mesa Tactical. Buy with confidence that we stand behind the product we sell.