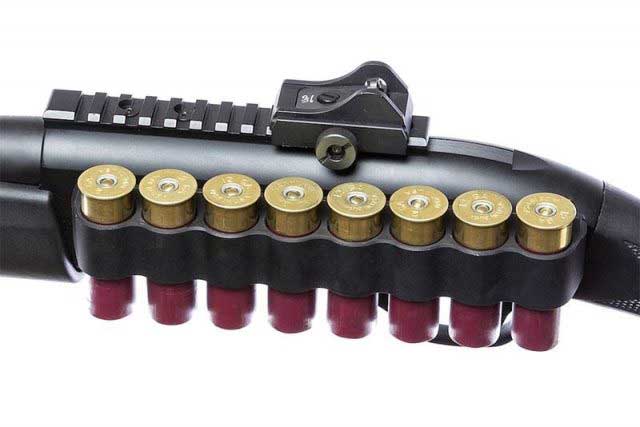 Features and Benefits of the FN SLP Side Saddle :

The principle difference between one model of SureShell and another, aside from capacity, is the backing plate, which is designed to mount the carrier assembly on a particular model of shotgun. Side-mount Mesa Tactical SureShell shotshell carriers for Mossberg , Remington and Benelli M1 shotguns use the trigger group pin holes to secure the assemblies to the weapon; the Benelli M2 Tactical, Benelli M4/M1014, Benelli SuperNova Tactical and some Mossberg 500/590 versions take advantage of the factory-tapped rail mounting holes in the tops of these shotguns and include integrated Pictanny optics mounting rails; another version with an integrated rail is the saddle-mount design for Remington; SureShell Carriers for M4 SOPMOD stocks feature special hardware for attachment to these buttstocks; Adapter Mount Mesa Tactical SureShell shotshell carriers are designed to be attached to Mesa Tactical Telescoping Stock Adapter accessory mount points.

SPECIFICATIONS for the Mesa Tactical Sureshell Carrier for FN SLP

Factory shotgun forends, except “tactical” forends, often feature significantreceiver overlap when the bolt is pulled back. These forends will need to be cut down or replaced with aftermarket “tactical” forends to be used with some SureShell shotshell carriers. Before you install a SureShell shotshell carrier, measure your forend’s receiver overlap and compare it to the furthest forward point of the shotshell carrier. Then cut any potential overlap or interference off the end of theforend with a miter saw or a rotary arm saw for a perfect fit.

The mounting system for the SureShell carrier for the FN Self-loading Police shotgun is similar to that of the Mossberg 930, with two sets of Chicago screws in place of the two trigger pins.

SureShell aluminum shotshell carriers for the FN SLP fit on the left side of the receiver only, and will not interfere with the forend.