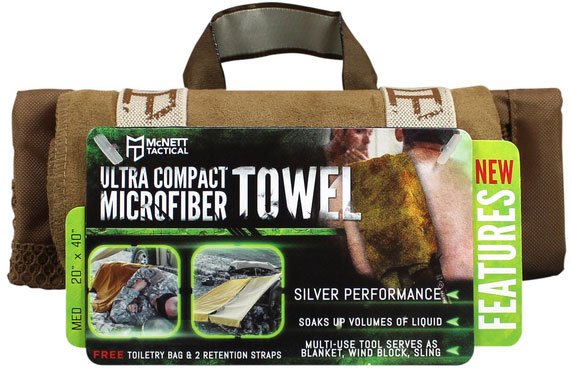 When I was getting all my stuff ready before leaving on my trip to go backpacking around the world, it was clear that I shouldn’t pack a regular towel because it would be so bulky, and take up too much room in my backpack. I finally determined that the only choice that made sense would be to take a microfiber travel towel because it would not be bulky and it would dry out quickly.

I wasn’t entirely sold on the idea at first because I had used these small microfiber towels on my car at the car wash and myself at the gym and they didn’t have a very nice feel to them. I logged onto Amazon to read the reviews, and I wasn’t the only one who thought they felt “icky.” Another complaint being voiced was that they were too expensive, maybe five times the price of a regular towel you could buy at Walmart.

Finally, I decided that this seemed like my best option, so I ordered a couple just to try them out.

That was two years ago, and to this day I wouldn’t be without my McNett Microfiber Towel, which is also sold under the name of Micronet Microfiber Towel. I take it with me on every trip and even use it back home, several times a week at the gym.

I never cease to be amazed at how quickly this towel dries. Even when it is soaked, it can wick away the moisture like magic. Many times I’ve used it to wash while showering and then hand-squeezed the water out and used it again to dry myself off.

I love that the microfiber towel is so lightweight and compact. I tossed the carrying pouch and instead keep it in a plastic baggie, the size used for bulk produce available at any grocery store. When it’s folded up, the towel is about the size of an average fist.

Toss the carry pouch – it adds another 1/3 of bulk to the towel. Just fold it up tightly to the size of a fist and place it in the plastic baggie.

A word of advice – order it one size too large. At first, I got a size Large because I thought it would match a size-38 waist, my standard size. But it wouldn’t fit the whole way around my body, and it was just too short. So I ordered an Extra Large, which usually corresponds to a 40” or 42” waist, and this size wraps around my waist just fine.