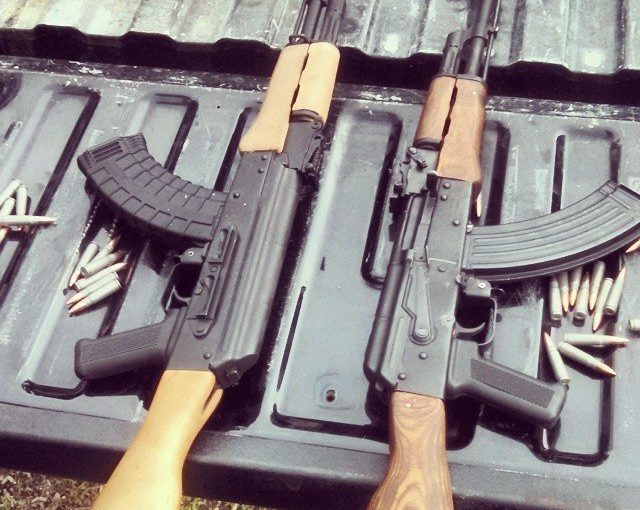 There is little doubt that the AK-47 is the most popular rifle in the world and has produced a myriad of designs based on its simple, yet elegant approach. However, people still have plenty of questions about the AK-47 and what follows are some of the most frequently asked. For those who may be interested in owning an AK-47, you will want to know the answers to these questions so that you can make the most informed decision about your purchase.

What does the Name “AK-47” actually Mean?

There are three parts to the name of the weapon;

How Many AK-47 Variations Exist?

There are hundreds of variations that are found all around the world. This is because the AK-47 is the most mass produced assault rifle that has ever been made.

Are all 30 Round Magazines Accepted by the AK-47?

The answer is no. For example, in California only 10 round magazines are accepted. This particular type of gun has to be converted to using standard AK magazines and a gunsmith is recommended for this task. However, all other types of AK-47 models should accept the 30 round magazines with no difficulty, but check with your local laws to ensure that you have a legal magazine for your rifle.

What is the Difference between a Stamped and Milled Receiver?

A milled receiver is one that is crafted from a solid block of steel which some consider to be stronger than stamped. A stamped receiver is a piece of sheet metal that has been bent into shape and riveted together. Since the stamped type of receiver is easier and cheaper to create, it is far more common than the milled variety which is generally seen on older AK-47s. However, the difference in strength is not that important as any impact that could cause real damaged to a stamped receiver would probably also harm the weapon significantly as well.

What are the AK-47 Flash Suppressor Thread Dimensions?

The standard thread dimensions are 14mm x 1mm for the left hand thread.

Is the Furniture of the AK-47 and Saiga Interchangeable?

The Saiga will not accept the furniture from the AK-47. While the Saiga was designed with the AK-47 in mind, it was also a more “sporting” firearm with a different type of appearance. While some companies manufacture replacement furniture for the Saiga, it is not compatible with the AK-47.

No. This is because milled receivers are thicker and are too big for those designed with stamped receivers to properly fit.

Yes. There are essentially two options for scope mounting. The first choice is to replace the top receiver cover with one that has built-in rings or a rail system. This will allow scopes to be attached. The second method is using the receiver side mount. There are some AK-47s that have the side mount already installed, so you can use that part of the rifle itself.

If the side plate does not exist on your AK-47, then you can have a gunsmith install one for you. While the side mount costs more than replacing the top receiver, it can be worth the extra money to pay the gunsmith. However, it must be noted that replacing the top cover receiver is fairly easy to accomplish and does not require a gunsmith. What are the

Common Calibers for the AK-47?

There are essentially four calibers that are currently available. The standard 7.62×39 is the most common and is found on AK-47s that have been manufactured in former or current Communist countries. Also available are the 5.56 NATO and the 5.45×39. In addition, there are also .22LR calibers that are often used in training rifles.

Despite the reputation for the AK-47 working in all types of weather conditions, it must be cleaned on a regular basis in order to maintain its functionality. In fact, proper cleaning will not only keep the AK-47 functioning properly, but it will also increase the accuracy and extend the life of the rifle as well. Keeping your AK-47 properly maintained will improve its overall performance just like any other rifle.

Yes, it will accept the standard furniture available for the AK-47.

What Does “922 Compliant” actually Mean?

The 922 Compliance has to do with firearms that are banned from being imported to the US. Typically, these are military-style semi-automatic rifles much like the AK-47. However, parts kits can be imported to the US as long as the receivers are either not present or “de-milled” which means they are cut in a fashion to make them non-operational.

However, you can assemble these parts kits in the US and use a US-built receiver. This is because part of the 922 Compliance law does require that certain parts made in the US must be used in the construction of a weapon from a foreign source. The exact number of US parts is determined by the model itself. This is also true of modifying particular types of rifles, such as the SKS for example which must also use a certain amount of US-made parts in order for it to be compliant.

What are the differences between the AK-47 and the AK-74?