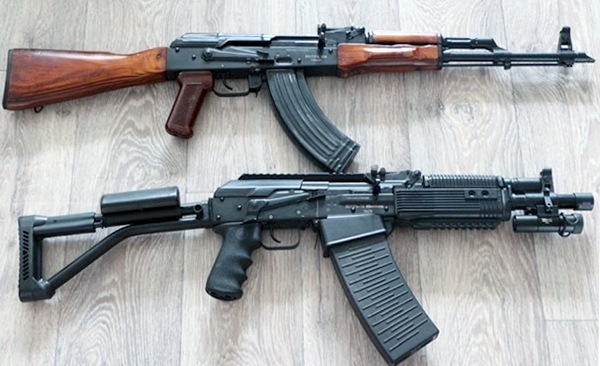 The AK-47 is certainly the most widely used military rifle in the world with over 45 countries still using it in their major military actions since the 1940s. The simple design hasn’t changed much over the years, but there are many different variations that currently exist.

What follows are 20 of the most popular variations and what they offer. You will see some very familiar versions as well as those that are less well known. In any case, they are the types of AK-47s that represent the best in terms of what they offer while providing their own unique touch.

This is a chambered 7.62x39mm, stamped steel receiver. The AKS does feature a side folding Phenolic stock set and it arguably one of the rarest Chinese versions of the AK-47 found in the United States which speaks to the uniqueness of this rifle.

This is a stamped receiver variant of the Type 56 version made by the Soviets after their alliance split up. So, this particular version was essentially reversed-engineered by the Chinese without any help from the Soviets. This particular version does offer two unique aspects, the first is the fully closed front sight and the second is the rather distinctive rivet pattern that could only come from China at the front end of the receiver. Since it was first developed in the 1950s, there may be as many as 15 million that have been produced.

This semi-automatic version is a very close copy of the Type 3 Russian-made AK-47. This is because the Soviets set up the Type 56 production, supplied the equipment, machinery and technical assistance to allow the Chinese to really copy their version almost completely.

This particular version has a side-folder and was produced at the Ernst Thaelman factory. Using a Bakelite grip, upper handguard and wire stock, it was originally given to mechanized infantry and airborne units.

Also known as the “Maadi”, this particular weapon was a very popular import into the US in the early 1980s. Using a stamped receiver, the Egyptian ARM is very similar to the Russian ARM version, although this one does features a side folding wire stock.

The AKM-63 is a full size rifle featuring a wooden stock, vertical wooden foregrip and a metal fore-end with no upper handguard. One of the rarest on the market in the US with only about 1,100 imported.

This is a short, 12.6” barrel that uses the same foregrip as the AKM-63. It does have a side folding wire stock, a shorter sight radius and barrel which does make it less accurate, although more handy than the AKM-63

This DMR version features a longer barrel, Romanian LPS Type 2 and Yugoslav ZRAK for getting at longer distance targets. This weapon is often mistaken for the larger 7.62x54R-chambered sniper weapon.

Created using the Yugoslav M70B2 version, this has a stamped, RPK receiver, rubber butt-pad, gas shut-off valve and wooden furniture along with a host of features that include a slant muzzlebrake. This rifle can also launch rifle grenades as well.

This is a very close clone of the Russian AKM version. It features laminated wood stock set, stamped steel receiver, synthetic pistol grip, slant-cut compensator along with an oil bottle and Polish bayonet.

This is actually a stamped steel receiver type of PMKM that includes an under-folding stock. It also features an AKM-type beavertail fore-end as well.

Polish Tantal WZ88This interesting variation has the ability to fire three rounds at a time like a “burp” weapon. Plus, it features a selector switch on the left side of the receiver for additional mobility. You can fit night-sights, grenade launcher attachment and a muzzle-brake as well.

This particular weapon is a semi-automatic with a large “G” engraved on the rear sight. Arguably the most popular of the Romanian versions of the AK-47, more than 20,000 have been imported into the US.

This particular version offers a vertical grip that is located on the lower handguard and also has a side-folding metal stock which collapses into the right side of the receiver. The muzzle-brake helps absorb the recoil as well.

Reflecting the year it was made, which was 1963, this was the first AK variant made by the Romanians. It is virtually identical to the AKM version made by Russia, but does have a chromium-plated bolt along with a chamber and piston.

This is the first under-folder version built in Romania and is otherwise identical to the PM md. 63 version as it is built.  It does have a stamped steel receiver and a vertical foregrip as well.

The Khyber Pass is the main trade route between Afghanistan and Pakistan where these models are made using parts that they can find. It does often feature an AK-74 type of folding stock and it arguably most infamous as the weapon that the late Osama bin Laden was seen firing in many different videos.

An under-folding metal stock based on the MP40 from Germany and a stamped steel receiver, this unique version was built from parts captured from the Palestinian Liberation Organization (PLO) by Israel in the 1980s.

Issued to the Yugoslav Army which no longer exists, this version uses a heavy RPK-type receiver, rubber butt-pad, wooden furniture, grenade launcher and a gas shut off valve as well. It can use thread-on grenades to fire, assuming you have them. This is a heavy, but versatile weapon that saw many years of service.

This is a short-barreled version of the AK-47 that was used by Special Forces in Yugoslavia. It also features a two position rear sight, stamped steel receiver, under-folding stock and an expansion-chamber muzzle device as well. The rear sight is actually mounted to the top-cover as well.