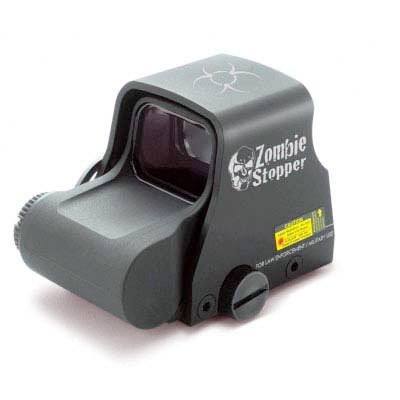 When you think of the term “zombie stopper”, a rifle sight may not be the first thing that comes to your mind. Still, zombies are part of the movies, video games, and television shows along with being named in many different products as well. EOTech certainly has a read on the marketplace and with the current pop culture fascination with zombies they have christened their new sight the XPS2-Z Zombie Stopper.

The XPS2-Z is crafted on the same framework as used by the armed forces and is trusted by LEDOs who have used the sights extensively. In fact, this particular version is one that lives up to the hype and is everything that a person could expect an EOTech product to be. The Zombie Stopper is tough, durable, very visible, and clear, holds zero and gets a solid target acquisition that makes it one of the most impressive models produced today.

The XPS2-Z carries on from its predecessor with some interesting new takes, including the ability to adapt to Zombie gear which is becoming quite popular. While the zombie trend will fade like most others, at least the personnel behind EOTech are taking it all in good humor and have used this opportunity to improve an already impressive design while adding a bit of flair as well. The nifty biohazard symbol incorporated into their 65 MOA circle along with the 1 MOA dot was a nice touch. This actually helps in estimating the range and makes the sight more consistent than their previous models.

The outside of the XPS2-Z is fashioned from tough, durable metal that has been blued. The metal casing more than adequately protects the glass and laser of the unit. With the famed biohazard symbol and “Zombie Stopper” on the side, it is certainly very recognizable and for many will be a stylish choice as well for their rifles. The right side of the unit features the windage and elevation that is typical of EOTech sights.

The CR123 battery is designed to last about 600 hours when set on maximum brightness which is a great feature. Another advantage is that the XPS2-Z takes up less of the rail needed for many other brands of sights so that you have more room to make a proper placement. The professional aesthetic of the sight is also kept in line thanks to the choices of neon red, green and orange as well.

While many people may not be impressed with a sight that embraces the zombie pop culture phenomenon, it is helpful to know that the EOTech XPS2-Z is really an upgrade of the standard XPS2 version and delivers the same great performance in a nifty new package. If you enjoy brandishing the biohazard logo on the side of your sight, then the new sight from EOTech is certainly one that will fit your needs while not putting a hole in your wallet. This is one of the better sights on the marketplace today and you cannot go wrong by choosing this particular model.