The concept of a gun grip is simple – it either works or doesn’t; there is no middle path. Popular grips for handguns and rifles include Hogue grips and the popular moulded rubber slathered ones.

The MOE+ is basically a standard rubber coated Magpul MOE grip. Magpul has a track record for manufacturing quality products, but one should not spend money on something based on a flawless track record. Brands which have a good record can go wrong too. One can take a look at the Nintendo Virtual Boy for a fair justification of this fact. So, is this grip as good as Magpul’s previous products or better? Let us take a look at its features and evaluate. 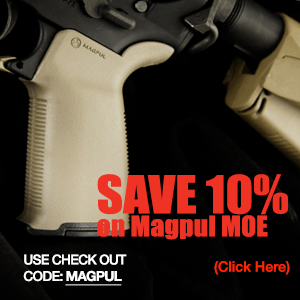 The MOE+ comes with the same features as its poorer cousin — grippy serrations on both sides of the grip and a hole in the bottom. It is made of plastic and rubber and comes with an MSRP of @23.95.

With the existing Hogue, the MOE+ concept isn’t entirely original. However, unlike Hogue, which moulds the grips according to the shape of the shooter’s hand, Magpul decided to simply cover their grip in rubber without changing its shape. The decision to keep the shape intact was fair, as this feature of the grip was good already. The simplicity of its shape is probably a reason why the rubberized version costs only about $3 more than the plain version.

Long safety levers are convenient as all one has to do is slide a finger backwards for the safety to come off. However, that is not the case with the MOE+ grip, which is the only negative point about it. The rubber grip bits are ideal for keeping hold of the rifle even when wet, but they also hinder the easy finger slide due to increased friction. One needs to flick the safety to take it off each time.

The product uses excellent ergonomics as it fits comfortably in one’s hand and the angle of grip is convenient. The grip is good and helps in keeping hold of the gun. Overall, the MOE+ is average and not something extraordinary. Slick plastic grips are a preferable choice over MOE+, but if one is looking for more grip, they should definitely go for the latter.