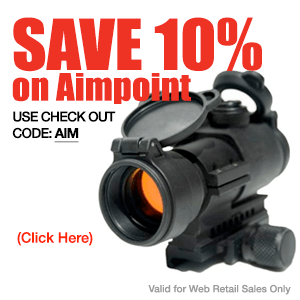 Aimpoint to simplify aiming and improve your shooting

You never know when you will take your best shot

A gun sight should improve and simplify the shooting process while meeting the highest demands for function, reliability, and quality.

Shooting conditions put unique demands on your equipment and when it comes to accuracy, the first priority is the right sight. That’s because you never know exactly when or where you will get the opportunity to take your best shot.

Aimpoint is the recognized worldwide leader and originator of red dot sighting technology. After more than 35 years of working closely with military weapon systems experts, experienced hunters, and marksmen around the world, Aimpoint red dot sights remain the No. 1 choice for combined speed and accuracy.

A wide variety of demanding users

Hunters: For more than 35 years, Aimpoint sights have been used by hunters around the world to take virtually any type of game. From Cape buffalo in Africa to Kodiak bear in Alaska.

In 1997, the U.S. Army awarded Aimpoint the world’s first military contract for red dot sights. Since then, Aimpoint has continued to deliver large quantities of sights to customers like