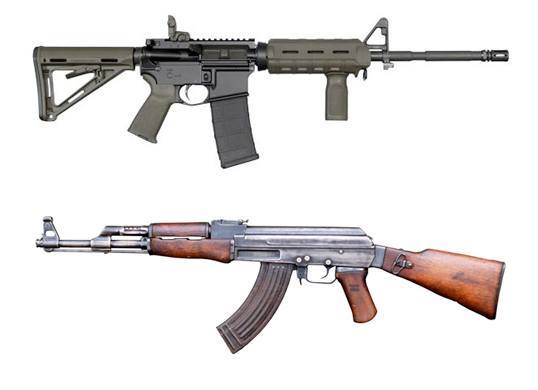 The Russian AK-47 and the American AR-15 have enjoyed an interesting history that has seen their paths cross many times either on the battlefield or mostly with collectors who own these impressive weapons. Understanding the true nature of both of these weapons starts in the post-World War II era when their collective story begins.

The technology to produce assault rifles really came into its own as World War II was closing out. The major countries in the conflict were advancing their technology in a race to outdo the other which resulted in a myriad of assault rifles being created.

The Germans created one called the “Storm Assault Rifle” or StG 44 which would play a very important role in the development of rifles after the war. This particular assault rifle had the ability to suppress soldiers that previous two-man machine gun weapons could which marked an important advance in weapons technology.

After the war, both the US and the Soviet Union recognized the value of the StG 44 and began to develop their own versions which would create the most recognizable assault rifles in both the East and the West for many decades to come.

The History of the AK-47

This was one of the first new assault rifles produced by the Soviets after the war. It was created by Mikhail Kalashnikov who was a tank driver that got injured in the Battle of Bryansk. During his stay in the hospital, Mikhail was inspired by his frequent flashbacks to develop the rudiments for what would become the AK-47. He actually entered a contest to create a better rifle which led him to a team of designers working with the army.

By 1944, his gas operated carbine was ready for testing. After a few trials, he created the stock version of the AK-47 which was finally accepted by the Soviet government in 1949. It is the AK-47 wood stock finish on the barrel, grip and butt of the weapon that makes it rather easy to identify. However, it is the gas operating reloading design that makes this weapon particularly unique. Basically, it provides energy for the high pressure gas that is subsequently released for the next cartridge to be loaded. This long stroke piston model can fire in very harsh environments even if the gun is not well maintained. This is due in part to the gas from each round is not directed back into the chamber which helps keep it clean and reduces jamming.

The operating cycle of the AK-47 consists of loading the magazine, pulling the charging handle which inserts the round and firing the weapon. There is a semi-auto and auto cycle which will fire one new round at a time or the entire magazine respectively.

In 1952, the wood, barrel and grip design that is now synonymous with the AK-47 was first developed. The RPK version is a handheld machine gun while the AKM and AKMS are lighter versions of the AK-47 model that has a folding stock while the Saiga Series is a civilian version designed for hunting as well as being a hybrid semi-auto shotgun version as well.

The History of the AR-15

The design of the AR-15 is credited to Eugene Stoner who was one of the most successful designers of firearms in the 20th century. After becoming the chief engineer at the Armalite division of the Fairchild Engineer and Airplane Corporation in 1954, Stoner began testing a number of firearms that began with the moniker AR. Different versions of the AR included the AR3, AR9, AR11 and AR12 which did not amount to much, but the AR10 showed real promise.

By 1956, the AR10 was submitted for entry to the US Army proving grounds. Although the Army didn’t accept the AR10, the Dutch were impressed enough to order the weapon. However, Stoner then redesigned the AR10 for a lighter weight model and the AR-15 was born. Also known as the M16, the AR-15 enjoyed a considerable amount of success in many different fields.

The AR-15 uses direct gas impingement which was first developed back in 1940 in France. Stoner used this system on the AR-15 where the high pressure gas forces the piston into the bolt which reloads the chamber after each round in fired. This cuts down on the weight of the weapon because no extra gas cylinder is needed. The lighter weight is why the M16 version was so popular in the US Army. However, the AR-15 did suffer from jamming after being fired thanks to the smaller barrel design.

Once the round in loaded into the chamber, pulling on the charging bolt inserts the first round and the weapon is fired. The M16a2 for example has a selector switch which can fire a single round at a time, three rounds at a time or all the rounds until the magazine is empty.

There have been a number of variations of the AR-15 over the years which include the different companies that manufacture the weapon and have put in their own unique touches. Some of the manufacturers include the following;

Each of the new variations, designs, upgrades and new parts and AR-15 accessories actually make it very easy to customize the AR-15.

Today, the AR-15 for civilian use is quite popular in hunting small to medium size game and many sports enthusiasts use it for target practice. With the sheer number of features and designs on the marketplace, the AR-15 is often customized by its owners and it is also very easy to clean and maintain as well. It’s little wonder that the AR-15 is one of the most popular semi-automatic rifles in the US today.

There is little doubt that the AK-47 and AR-15 have enjoyed rich histories and are still being used in combat today. While the arguments persist about which one is better, what can be said is that both enjoy unique advantages which actually makes comparisons based on what type of features are preferred.