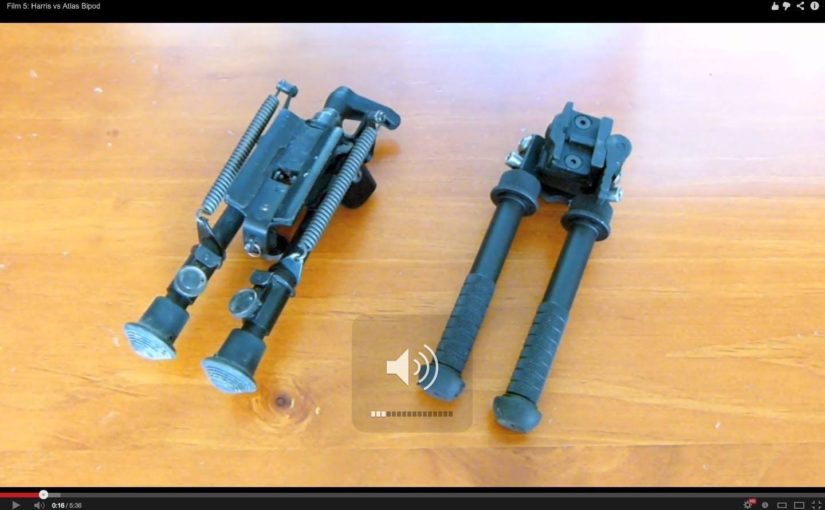 The Harris Bipod is known to be one of the most popular bipods currently available, with thanks to many of its distinct features and also its budget price. The features of the Harris bipod include a countersunk locking cross bolt that aids in preventing any possible snagging. The clamping sidebar is fashioned into the actual body of the adapter which allows for a smooth design.

A very high percentage of shooters currently use the Harris Bipod with the majority using the Harris S-BRM 6-9” Notched Bipod (or also known as the HBRMS). The HBRMS is one of the brands shortest bipod with its legs extending from just 6 to 9 inches, and it is considered as Harris’ ‘benchrest’ model. Not all shots are taken from a bench. However, you may find yourself taking shots from a prone position. This particular height range from the HBRMS is perfect for a range of prone situations.

The Harris bipod is also popular due to its notched legs. The notches on its legs provide preset height reference points which in theory should make adjustments to each leg quick and easy. This means that both legs can be set to the same height as one another with minimal effort.

This particular bipod also comes with its swivel feature. It provides you with the ability to tilt your rifle from side to side, which unarguably makes it far easier to achieve a level sight on uneven terrain without having to deal with leg height. As most shooters will know, a small amount of cant on a rifle can result in a miss when shooting from a long distance. This feature of the Harris can aid shooters in successfully hitting a target at long range.

The Atlas bipod is known for its abundance of fantastic and bespoke features that could rightfully place it in a category all of its own. The popular bipods features include legs that can move entirely independently and can also be deployed in a 45-degree positioning either backward or forwards respectively. They can also be positioned in the traditional 90-degree angle, or facing directly to the back or the front. The legs are also able to lock securely into five preset positions through an entire 180-degree arc. The added flexibility of the Atlas’ legs can also potentially make the bipod far slower to deploy than the Harris. As we are well aware, seconds count, and it’s hard to see the Atlas beating the quick and simple deployment of the Harris.

The Atlas provides shooters with a full 30 degrees pan of either left or right plus a matching 30 degrees of Cant. This flexibility from a bipod can allow shooters to easily align their crosshair on any target regardless of the terrain. The Atlas Bipod provides robust and solid support, something that any shooter is looking for in a piece of equipment. With its sheer strength and stability, it’s shocking to hear that this featherweight bipod only weighs in at 366g.

While most of us are more than familiar with traditional style bipods such as the Harris, the Atlas is somewhat different. The Atlas provides a lot of unique features that are very rare to find on any other bipods in its category.

For example, the Atlas has quick-interchanging leg extensions and feet which can be easily installed by using they’re built in steel plunger mechanism, which is designed to help securely lock the legs in place. With thanks to the bipods extending feet, essentially allows the shooter to use the bipod in many different scenarios.