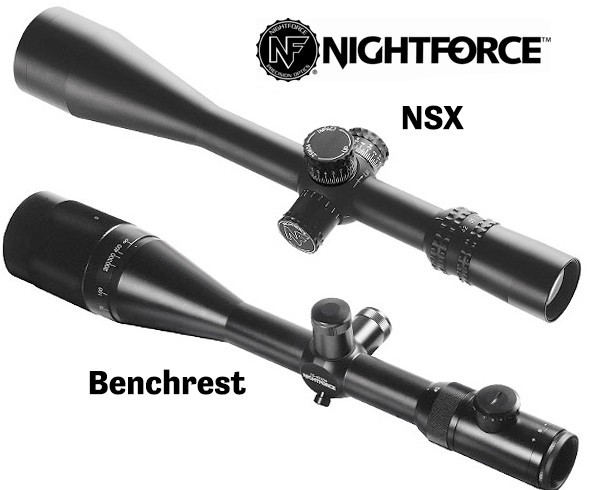 When looking over scopes that are produced by Nightforce, a company that has earned quite a reputation since it was formed in 1992, the invariable question that arises is should you purchase the NXS or the Benchrest model?

It is a pretty good question as each has their own specific applications and offers different advantages for the shooter depending on their needs. Nightforce has built a strong reputation with both versions as being solid, reliable and having plenty of features that makes them desirable for shooters to use. In this article, we will discuss the similarities and differences between the Nightforce NXS and Nightforce Benchrest models so that you can make the best informed decision about which one to choose for your particular needs.

Here, the typical Benchrest (BR) model is roughly 60% of the cost of the Nightforce NXS version which automatically makes is an attractive choice. However, the NXS scopes are generally more durable and feature a side parallax adjustment or focus where the BR version only has a front end adjustment for correcting the parallax.

Another noticeable difference is the click values for each type of scope. The BR scopes are set at 1/8 MOA while the NXS is set for ¼ MOA in terms of clicks. However, the NXS has the famed “zero-stop” feature that allows you to quickly change the elevation turret until it reaches down to the close zero range which is usually 100 yards. The advantage of the zero-stop feature is that you don’t have to “count the clicks” to know that you are back to the zero range.

Admittedly, the 1/8 MOA click on the BR is generally better for those who enjoy long range shooting as these types of clicks allow you to adjust the point where impact occurs with more precision than the ¼ version. For example, when using the ¼ MOA clicks, they are worth roughly 2.6 at 1000 yards compared to the 1.3 for the 1/8 version. All things considered, it is arguably easier to dial in the target when using a 3 to 5” 10-Ring or X-Ring.

The Nightforce BR models all have the 1/8 MOA clicks which are generally speaking the better choice for longer ranges. However, Nightforce has now added 1/8 MOA clicks to their NXS 8-32X and 12-42X models as well which means that those who prefer a side parallax control can now have better click values to boot.

In addition to the aforementioned 1/8 clicks, there is also the “Mil” or milrad clicks as well. Those who have a reticle based on the milradian scale or one with an MLR reticle or mildot will prefer the NXS scopes because currently the BR scopes do not have this feature.

For shooters who generally only use their weapon in protected environments where the elements or movement have little effect on their shooting will not care so much about durability. This is because most rifle scopes that encounter little in the way of the bumps, scrapes and impacts that hunters often encounter or those who enjoy moving between shots quickly and taking up new stations will last a very long time.

However, hunters in particular will want a scope that will hold up for a long time under the rugged conditions in which they operate and while the BR scopes are pretty good, the NXS scopes are simply much better. This is because the NXS scopes are built to withstand all sorts of impacts and hold up under the elements because of its thick aluminum tube.

This is one of those differences that will come down to the personal preferences of the shooter. The NXS offers the side-focus parallax adjustment which adds a focal lens to the body of the rifle scope which is not required in the BR models. This means that the overall brightness in the scope is reduced by almost 1.5 percent which in most cases in negligible, but some shooters will want all the light they can get, especially in darkened conditions.

However, the side-focus parallax is far more convenient to use when in a prone position because you don’t have to reach around to the front like you do with the BR scopes. However, many people prefer the front adjustment, especially if they are sitting in a fixed-distance environment like a shooting range where adjustments can be made with ease.

Only the NXS version has this particular feature and it certainly is a good one. This is especially true for those in the field subject to changing target ranges where having the ability to set a “zero-point” and then returning to that point quickly can make all the difference. In the end, having such ability for hunters may be absolutely necessary which means that the NXS scopes offer a major advantage. However, this does fall somewhat to personal choice as well, so it will mean what you prefer will count. It must be noted that the 12-42 NXS does not feature the zero-stop.

Which One is Preferable?

Obviously, personal preferences will play a large role in deciding between the Benchrest and the NXS scopes. The main factors that offer the differences between the two are the cost, focus/parallax adjustments and the durability of the scope itself. It can be said that hunters and those who expose their scopes to rugged environmental conditions along with moving around a great deal will arguably benefit with the NXS scope. However, those who enjoy target shooting, particularly if they are set in one place may desire the BR scope as it offers advantages as well, including the lower price.

Both types of scopes are certainly very well made and certainly worth the price thanks to the high quality materials and effort that Nightforce puts into their products.