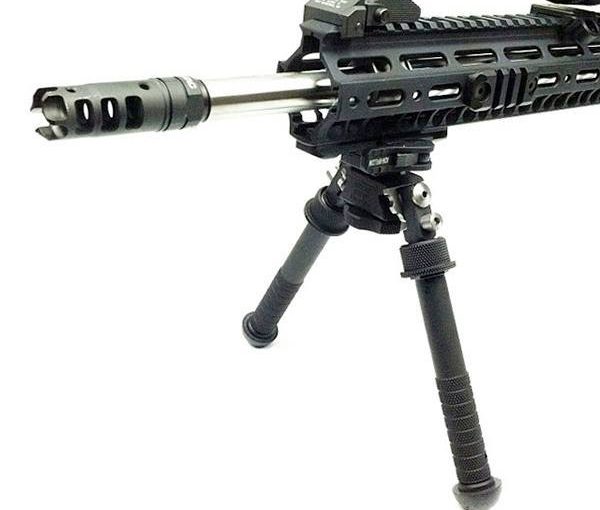 One of the things that rifle owners look for when they purchase a weapon is accuracy and precision. One of the best ways to take a great rifle and make it better is with the addition of a bipod for support when prone. As is the case with all gun accessories, there are a number of options to choose from when it comes to bipods, which means trying to compare to find the best. The TRG and Harris Bipods are among the best known of the bunch, but the Atlas bipod is one that deserves a little recognition, too.

The Atlas Bipod is still fairly new to the game, and the first thing that you notice right away is that it is a little lighter than the Harris. It also has a different way of attaching to the rifle, which is via a short section of the picatinny rail. There are those that will argue that the swivel studs are the best way to attach, but when you try out both ways of attaching, we just get the feeling that the better level of support comes when attaching to the rail. This is something that may very well come down to personal choice, though.

One thing that may put many people off the Atlas Bipod is that it comes in at about twice the price of the comparable Harris model. While that may not be suitable to the casual shooter, those looking for real support and precision will likely not mind paying the extra. This is because the Atlas Bipod looks to have a much better fit and finish than the Harris, as well as being a good deal more solid. The latter is something that you might not expect given how light it is when compared to others.

The Atlas Bipod has a range of flexibility and adjustment that goes above and beyond what is delivered by the Harris. It comes with the ability to adjust each leg independently into five different positions. Where it falls a little behind the Harris is how quickly the mechanism deploys. While the Harris Bipod is the quicker of the two, the time difference really is barely perceptible to anyone but real rifle experts.

The Atlas bipod comes with 15° of pan and tilt that make it perfect for use on uneven ground. While the Harris can deliver on the tilt front, I cannot pan in the way that the Atlas can. The inability to pan makes it tough to go after a moving target. Load is also built into the Atlas, so that the device will not bounce from the recoil of the weapon being fired. The Harris does not do as good a job at keeping the bounce at bay.

All told, both the Atlas and the Harris Bipod essentially do the same thing, but the nod has to go to the Atlas Bipod due to the fact that it is the more user-friendly of the two.