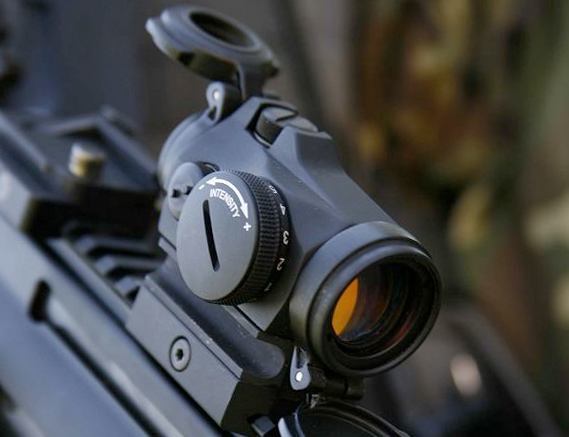 Aimpoint, the originator and world leader of electronic red dot sighting technologies, unveiled a new sight to the company’s professional lineup of products at Eurosatory 2014. The product, dubbed the Aimpoint Micro T-2, will be offered in September 2014 for shipment, and will be presented along with the existing Aimpoint Micro T-1 sight.

The Aimpoint Micro sight has developed as the gold standard for compact reflex sights ever since it was first unveiled in 2007. Both law enforcement and military end users love this optic for its durability, long battery life, and compact size. In the Micro T-2, Aimpoint has incorporated a number of refinements and enhancements that were unearthed during rigorous product testing with professional end users.

Among these changes are a new sight housing that allows the addition of protective flip covers and anti-reflective devices to the front and rear of the sight. Aimpoint has also increased the physical protection of the sight’s adjustment turrets, and made the internal electronic mechanisms more rugged.

Most importantly, though, this sight boasts heightened optical performance. The freshly designed front lens incorporates state-of-the-art reflective lens coatings, which gives the sight a greater precision and performance than the Micro T-1. No matter what angle or conditions the shot is under, the Micro T-2 ensures that the user can acquire and lock target quickly and accurately.

“Instead of merely making improvements to an existing product,” said Lennart Ljunfelt, President of Aimpoint AB, “we started with a completely new design.” He went on to add that the “Micro T-2 takes the level of performance available from a compact sight to an entirely new level.” The sight also provides performance enhancements and features that were “formerly available only in much larger optics.”

The new Micro T-2 is able to be attached to almost any weapon, and can be used with the same existing mounts used by the Micro T-1. All generations of night vision devices will work with the Micro T-2, and the T-2 is also ideal for use with accessories like Aimpoint’s 3X Magnifier and Concealed Engagement Unit. Using just a single CR-2032 battery, the Micro T-2 can operate for up to five years of continual usage, and is waterproof to up to 82 feet.