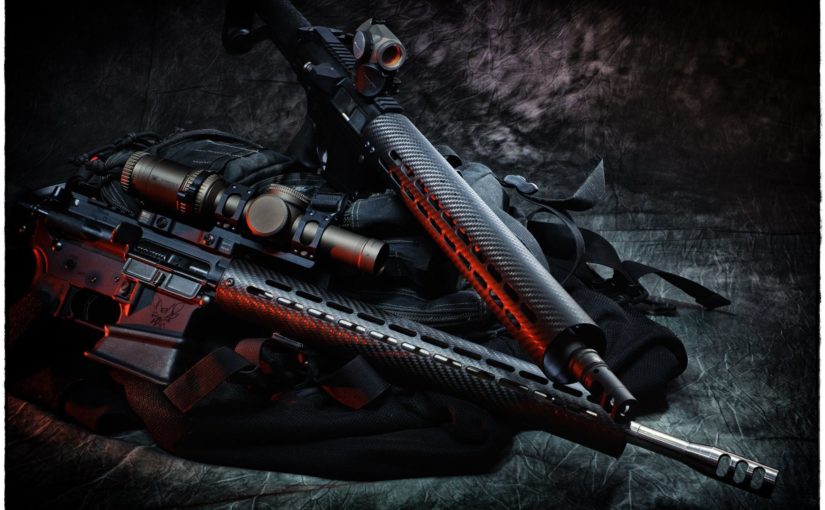 AP Custom is a company out of Missouri that produces handguards that are crafted from carbon fiber.  In addition, AP Custom produces shotgun carries as well, such as those used for “3-Gun” matches. However, it is the carbon fiber handguards that are attracting attention today for use with the AR-15. There are two different types that are currently available, the Rhino and the Lightweight versions. All tactical models include a picatinny top rail that is full length and come in either standard or tactical configurations.

The lightweight rails that are used have a free float design that include slots which are cut into the handguard in different positions to help provide ventilation. Plus, they can be used to attach various things such as rail sections, bipod studs and sling mounts. This is augmented by the fact that the AP Customs Lightweight Rail is arguably one of the lightest ever created in the industry.

In addition to its lightweight features, the AR-15 handguards come in four different lengths;

The handguards are feather-light in their Standard versions with the 7” weighing a mere 3.8 oz. up to the 6.2 oz. for the 15” Extended. The Tactical versions are a little heavier, but not much as the 7” clocks in at 5.3 oz. while the 15” Extended weighs 9.3 oz. With an identical interior circumference, the Standard and the Tactical versions are simple to install and easy to use. In fact, all you need is the AR armorers’ wrench to attach either version to your weapon. There is no need to use additional tools or epoxy substances in attaching AP Custom handguards.

As with the Lightweight design, the AP Custom Rhino Series is also available in both standard and tactical. The standard version has no rail while the tactical has a full top rail. The Rhino handguards are essentially the same as the Lightweight design, but instead of using open slots in its design, the Rhino uses what is known as a “key-mod” system.

A key-mod rail is quite popular today thanks to its solid construction and lightweight design. You can easily change your handguard accessories around and even re-configure what you have to fit the weapon of choice. In addition, you can make changes to a singular weapon as well, creating different configurations to fit specific needs. Another plus from AP Customs is that this particular rail design is open to future AR-15 accessories when they become available so that you don’t have to change out the rails. This is a nice touch which helps make the Rhino design particularly appealing.

The Rhino also has a key-mod mounting system and octagonal shape as compared to the Lightweight which is round and uses the standard mounting system. In both cases, they are relatively easy and intuitive to install.

The 15” version is one that offers a good choice for those with rifles, particularly long barrel versions. In testing this particular version, a billet LAW Arms that uses a Daniel Defense 16” upper assembly that also includes 3-Gun optics version.  In using this version compared to a similar one from Midwest Industries, the first thing that was noticed was just how hot the handguard from Midwest Industries got after firing a few rounds.

However, the AP Custom Rhino had no such difficult as the material used easily repelled most of the heat generated during the firing of the rifle. Even after firing over 60 rounds, the handguard remained comfortable and cool enough to keep using. The carbon fiber material is such that it can resist the heat generated by the barrel even after 100 rounds or more. This makes the Rhino particularly more attractive than handguards fashioned from aluminum as they transfer much of that heat.

The octagonal shape also makes switching out different applications simple and easy to perform, a big plus when you need to change out different items on the handguard. Plus, the shape itself makes it easy to stead a rifle on a solid, flat surface to gain additional accuracy. In essence, the overall design of the Rhino is quite exceptional and versatile as well.

There is little doubt that the Rhino excels at almost every feature when it comes to handguard technology. The future is certainly bright for this particular product.