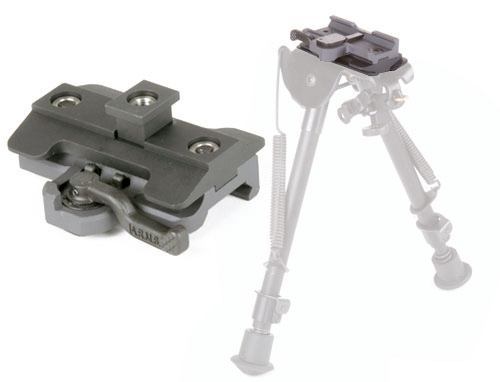 To install the mount, firstly the original Harris mount attachment has to be removed. This is accomplished by unscrewing the swing stud attachment from the base with an Allen wrench and then screwing on the Arms mount in its place which locks down quite securely. The Arms #32 mount has three distinct sections, namely the base, the adaptor and the quick release. The quick release has been designed to install or uninstall a rail system very quickly and does not require the application of any special tools, the lever takes a little force to release but that’s alright as it would prevent any inadvertent unlatching during operation. The mount has a rugged design and appears as one solid piece after installation on the bipod.

The bipod can be reverted back to its original configuration by following the same procedure of unscrewing the ARMS mount from the base and re-attaching the Harris mount for swivel stud systems.

It’s difficult to point out any deficiencies in the design or functionality of the ARMS mount. The only hitch to buying this exceptional piece of equipment could be its slightly steep pricing as compared to the competition. The cheapest listing was at $100, but taking into consideration the simple installation process and ease of attaching and detaching the rail system, this should not be very big factor when it comes to making a decision for purchase. The ARMS #32 throw lever adaptor mounts securely onto all Picatinny Rail Systems and is compatible with both the Notched and Smooth leg versions of the Harris Bipod.

This outstanding piece of equipment makes mounting of any rifle with a Picatinny rail system to a Harris bipod a charm. The throw lever mount assembly can be attached to either side of the Harris bipod and acts as a light weight attachment with a low-profile adding only ½” to the overall height. The simple installation and easy detachability makes it possible for the bipod to be removed anytime it is not being used. Even though it might restrict multiple weapon compatibility due to its design, the relatively quick process of reconfiguration to swivel stud makes it a must buy. It boasts of a black non-reflective finish and comes bundled with an adjustment wrench.