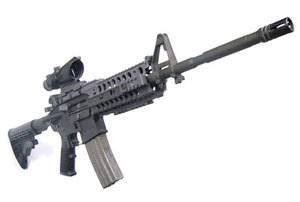 Some weapons become outdated or break in time and new technology simply takes the place of the old. Even though that is true, there are those few types of weapon that remained timeless both in their superior utility and amazing durability. One of these weapons, yes you guessed it, is the famous M-16 Assault Rifle. We see them everywhere, in television, documentaries and even video games, but what is it that made them so popular in the first place?

One of the reasons must be that they served the US military well in the Vietnam War. The first time an M-16 was used on the field was in 1963 in South Vietnam and it became a staple weapon ever since. Vietnam was a country with long rivers and treacherous terrain and the light M-16 was ideal for that environment, sparing the operator from carrying great weight across dangerous country. Not only that, but the M-16 was also extremely durable, as it didn’t break or malfunction even when it got wet or hit. Finally the most important reasons of all are that the M-16 is extremely deadly and powerful. The M-16 was compared to the AK-47 when it came to durability and strength.

The Vietnam War was taking longer and longer and the popularity of the M-16 was soaring. And for good reason, since 90% of the M-16s created in the 60’s still function and are used today!

The M-16 and the US military

Many military organizations fell in love with the M-16, including the US navy. This is most obvious when you realize that over 8 million different versions of the weapon exist today. It is also extremely important to note that the M-16 was perfect for customization, offering every soldier and collector the chance to alter the weapon to their liking and needs. Some of the most popular choices of attachments in the past have been grenade launchers, while the Grip Pod is one of the most sought after accessories of the M-16 today. If it had been legal people could even have added bayonets to theirs assault rifles, but the Geneva convention forbids to do so.

Of course a weapon as popular as this soon became available to the public as well in the form of the AR-15. Even SWAT teams in the law enforcement branch have used M-16s in their various operations.

Great assault rifles like the AK-47 could fire 600 rounds per minute, so it is quite impressive to realize that the M-16 can top that at an impressive 800 rounds per minute. This makes the M-16 an extremely dangerous weapon that can unleash widespread death in the matter of seconds. The M-16 also has almost zero recoil, as was demonstrated when an M-16’s buttstock was placed between a soldier’s teeth and then fired without hitting the soldier at all. This makes it very easy to continue firing the gun without needing to aim all over again after each shot.

The left handed version of the M-16 needed a pyramid to be installed, because early versions developed a small fault. It seems that the design of the left handed M-16 caused the shells from the bullets to hit the unfortunate operator in the face.

It comes to no surprise that in the 70’s the NATO adopted the M-16 and it is used 50 years later, up to this day, as an infantry weapon all over the world. Adaptable, durable and powerful, the M-16 has been the embodiment of all a soldier wants and needs from an assault rifle.