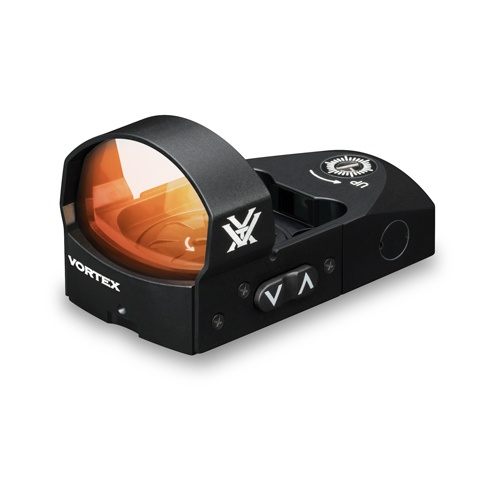 Unless you’ve been under a rock, you know there are tons of companies that are making red dot sights for pistol applications, or even companies that are milling out there slides to make it easier to mount an optic right to the slide itself, like this Glock 17 MOS for instance.

With that advent, a bunch of red dot sight’s have hit the market, and it’s tough to figure out which one. Ranging from a hundred to nearly a thousand dollars – making the call can be tough. Luckily, we here at SGPT got your six. This one is a 6 MOA dot Vortex Venom by Vortex Optics.

Let’s talk a bit about the specs first.

This red dot sight has a 6 MOA dot, meaning that it’s a bit larger than most rifle optics – that have a 2-3 MOA dot. MOA stands for Minute Of Angle, so this red dot sight would paint a 6 inch area on a target that is 100 yared dot sight away. Given that, I and the people at Vortex would recommend a 6 MOA dot for pistol application. While this optic does have risers and mounts to put it on a rifle or shotgun, I’d recommend using the 6 MOA on a pistol, as it allows you to pick up a target quickly. The lens is fully multicoated and designed to stand up to abuse, which offers wide and crisp field of view. Also, it’s backed by Vortex’s VIP warranty – they’ll replace it and all their products, no questions asked. This was a big selling point for me before I took the plunge – knowing that if I dropped it or damaged it in competition, I could get a new one. The flush mounted turrets are segmented into 1 MOA increments, which made zeroing this bad boy in pretty easy work. Pictured is my first 10 rounds or so with the optic zeroed at 20 yared dot sight, and as you can see, it’s ridiculously accurate. Many of those holes are touching, and they’re all combat effective to say the least. What’s more – the unit has a top load battery – which means you don’t have to re-zero your weapon after changing the battery. They make another model – the Viper – which is the lowest red dot sight, but you need to rezero your weapon after you change the battery since it’s loaded under the optic. For my applications, this is perfect. It also has 10 different brightness settings, which show up in low light as well as bright sunlight – but it even has an auto-brightness mode which is pretty awesome.

Now let’s talk construction: The unit is stoutly crafted from aluminum, and once secured to the proper plate on the top of my G17 MOS, it’s not going anywhere. Not that I would recommend it, but it’s securely well enough to rack the slide with it. The lens, as noted, is fully coated, with no glare or hazing noticed. They also include a rubber cover, pictured, to protect the optic when it’s no mounted, or you can slide it over like I do when I store it in a case. The flush mounted turrets don’t move unless you use a screwdriver, making this hold zero very, very well.

The dot is clear and crisp, as you can see, and once you get used to it, makes acquiring a target rapid. I also noticed the ancillary benefit of calling out when you are shooting incorrectly – be it anticipating recoil, pulling and not pressing the trigger, thumbing, etc. It’s a very good tool for a competitive shooter, but I think LEO would be remiss not to look into putting a red dot sight on their service weapon. It allows you to come from holstered to on target faster. The only caveat – is some active retention holsters won’t allow for this type of optic to be mounted, but plenty of manufacturers like our buddies at QVO Tactical would be able to make you something custom.

Overall it’s a fantastic red dot sight for your pistol, and I’m sure for your shotgun or 45 degree mounted on an AR for shorter range engagements. It’s built solid, backed by a stellar warranty, easily adjustable, and their customer service is second to none. The adjustments are easy and they include a tool, as well as other accessories to make everything simple. It mounts to a Glock MOS with the included plates (#1 I believe) and is a cinch to get zeroed in. With 10 brightness and auto settings, it’s good to go.

I look forward to sending more lead downrange with this red dot sight on it, and checking back in with all of you to let you know how I feel after a couple hundred rounds.

9/4/17 Update: Roughly 500 more rounds put through this optic on a G17 MOS and it’s still holding zero, and punching ragged holes that basically touch out to 25 yared dot sight. One thing I do have to note is the glass does attract all the dust possible, so you need to keep it covered, but that’s nothing that can’t be solved with a microfiber cloth.

The optic tracks right back when you’re going rapid fire, but does take getting used to if you’re using a pistol with traditional sights as often or more often than one with a red dot sight. I shot this in a couple matches, and it’s highly accurate, although not at short range. It takes a moment to pick up the dot, when with a standard pistol, you have to just pick up the front sight. However, with long shots, this thing makes the pistol surgical

Pros, what we like: Easy to use, easily mounted, and quick to zero. It’s build solid with a bright dot, plenty of features, top load battery, and an easy to read manual. Back that up with a VIP warranty, and what’s not to like?

Cons, what we don’t like: I like everything about this sight for my application. If I were to mount this on a rifle though, I think the field of view would be too small.