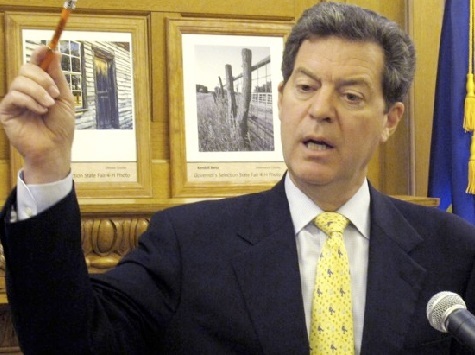 Gun violence and gun control have been topics of immense interest for ages. With new technology and advancement in firearms together with unfortunate gun related violence, heated debates on these subjects have resulted in clashes between gun enthusiasts, the government and anti-firearm advocates. In a recent development, Governor Sam Brownback and the attorney general have been named by anti-gun and anti-gun violence organization, Brady Center to Prevent Gun Violence, in a lawsuit.

Anti-gun violence advocates from the Brady center look to stamp out a state law that exempts guns manufactured and possessed in Kansas from federal regulations. According to the complaint, the Second Amendment Protection Act which was signed into law by the Governor last year is in violation of the US Constitution. The director of the center’s Legal Action Project in DC, Jonathan Lowy has insisted that US courts have repeatedly informed states that it is unconstitutional to override federal laws that do not necessarily work for them and that the observation is valid for gun-control laws too.

Reacting to the statement and lawsuit, the Attorney General, Derek Schmidt has indicated that the state will put up a considerable defense to protect Kansas’ constitutional rights and privileges while also indicating that the timing of the lawsuit shows that it is a political, rather than a public safety move due to impending elections. Sharpening his attack on the Obama administration for weakening state sovereignty by having the US Attorney General send a letter to the Governor informing that the law is against the constitution, he has indicated that the present lawsuit is also a continuation of that assault. The Legislature has been requested to grant $225,000 for legal costs.

The to and fro continued with Lowy in turn asserting that their lawsuit had nothing to do with the Obama administration but was meant to highlight the importance of adhering to federal gun-control laws and would serve as a warning to other states. While a Montana law was struck down by an appellate court, Alaska and Idaho laws still seem to hold.

According to the Statute, any US government employee who attempts to enforce federal regulations, treaties, laws or registration programs on Kansas manufactured or possesses firearms, accessories and ammunitions will be charged with a felony crime. All county prosecutors and state attorney can file lawsuits to prevent federal gun-control law enforcement in the state. The law pretty much allows those prohibited by the federal law from purchasing and possessing firearms to evade background checks in Kansas. Manufacturing of firearms without serial numbers and those that are built to circumvent metal detectors is also permitted by this law. Even though critics highlighted the preeminence of federal over state law, it was passed in the House last year.

The argument of Stuart Plunkett, a co-counsel in the lawsuit is that if every state were to be allowed to choose which law they can or cannot follow, then there would be a complete breakdown of the constitution and legal system.

The plaintiffs listed in the lawsuit are primarily those who have had personal gun-violence experience. It has also been mentioned that the State Secretary Kris Kobach has acquired a ownership interest in Minuteman Defense LLC which has plans to build AR-15 based rifles similar to those used in Aurora and Newtown shootings and this certainly assumes significance. It is going to be a wait and watch for the public.