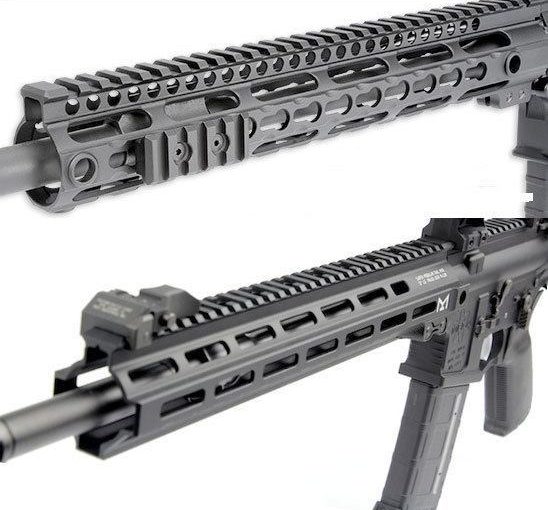 Recall Betamax? It was the first rival to the VHS videotape format, and on one occasion, it was just as popular. Yet if you were born after 1980, there is a good possibility you have never actually seen a Betamax tape.

We are on the verge of seeing the same major play out in the world of AR-15 rails. The picatinny accessory rail system is the standard for bolting stuff to the AR-15s as well as other firearms for many years now. It may be a great system, specifically for installing optics, although including picatinny rails on a firearm’s foreend/hand guard can also add lots of unnecessary mass and excess weight.

To ease this, you will find low profile hand guards that permit the operator to install small parts of rail mainly where they’re required. Not really a terrible solution, what if we could get rid of the middle step and attach components right to the hand guard without having a  picatinny adapter? The KeyMod and M-Lok systems do just that.

First released in 2012, KeyMod was created and launched through the cooperation between VLTOR and Noveske. It is an open source, public domain design, which means that any organization could make rails or components while using the system without paying any royalties.

Hand guards designed with the Keymod system can be extremely light-weight, and permit for the primary attachment of any Keymod-compatible components. Many companies currently produce Keymod firearms and hand guards along with accessories such as straight foregrips, flashlight mounts, bipod adapters and sling adapters.

Keymod rails include rows of “keyholes”. To install a keymod-compatible accessory, line up the lugs around the accessory using the round section of the keyhole. Slide it ahead, then tighten up the screws.

Great idea right? Magpul assumed so, too. They considered producing some Keymod compatible accessories, but were not satisfied with how the system worked with polymer accessories. So sometime this year, they invented their own contending standard called the M-Lok system. To improve their chances of the brand new standard, Magpul in addition has produced M-Lok free for the competition to use.

Magpul’s new M-Lok system makes use of slots instead of the keyholes. The connection lugs on M-Lok accessories are t-shaped and bi-directional to allow them to be positioned in front or back of the slots.

Send Us Your Reviews – Keymod vs. M-Lok!

Right now we have got two open source direct-attachment rail system standards which are slightly distinct, but eventually strive to tackle the exact same issue. Does the current market put up with 2 standards? Or will 1 ultimately reign over, leaving behind the other to be as forgotten as Betamax of the AR world?

Till the dust forms, we are considering the advantages and disadvantages of both system. I have acquired a Keymod and an M-Lok hand guard to evaluate, and over a couple of months I will be trying them out at the range anytime I have the chance.

Considering that there is no way I will be able to test every single available hand guard and accessory out there, I will be counting on your comments, too. Tell me about your encounters (advantages or disadvantages) of using both the Keymod or M-Lok systems.

Furthermore, please tell me if there are any specific Keymod or M-Lok related products you would like us to test. We will review the topic anytime ahead of time the coming year and let you know what we have found.