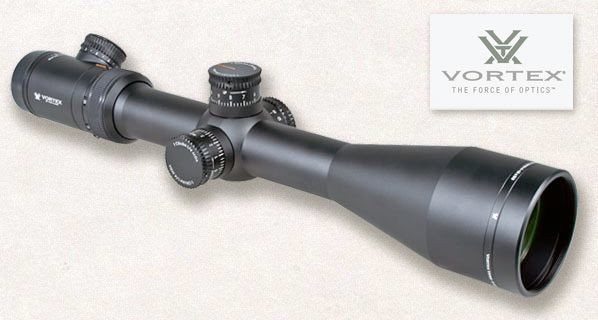 Vortex Optics offers a number of different optics in a wide variety of price points, with the Vortex Viper PST line of scopes on the higher end of the scale. For this review, we will look at the 4-16x50mm with EBR-1 MOA reticle. This particular scope comes in both a FFP (first focal plane) and SFP (second focal plane) version. It is the latter of the two that we will be discussing here.

There can be some very definite differences between the two types of rifle scope, with the biggest being that the FFP model does not change the difference between hash marks with power. That is not the case with the SFP model. If you regularly make magnification changes when factoring in bullet drop compensation, you may be better suited to the FFP. The majority of shooters go with a set it and forget it set-up, though, which makes the SFP model more than adequate.

Vortex Optics has done a fantastic job of making the SFP scope easy to use right out of the box by making it easy to understand how magnification changes the distance between hashes. The Vortex Optics PST SFP scopes, when used at the highest 16x power, come in at 1MOA = 1 MOA. That changes when the power setting are lowered, as in 4x setting at 1 MOA = 4 MOA. Since the MOA multiplier is clearly marked on the power ring, doing the multiplier/power calculations on the fly becomes a snap.

If you really don’t tinker with magnification that much, you can easily go with the SFP and save money in the process. The SFP model comes in at $699, which is considerably cheaper than the $849 FFP model.

Every model in the Viper PST line is equipped with an illuminated, easy to adjust reticle. It also comes with an “OFF” switch that allows the shooter to easily turn illumination off and on with fiddling with the settings. A 2032 button cell battery powers the unit.

It can be easy to forget your zero point when you are working the elevation knob during a long shot. The Vortex Optics PST is equipped with a Customizable Rotational Stop (CRS) that uses a system of shims placed under the elevation turret that will prevent you from spinning below zero point. You simply need to zero the scope, remove the elevation turret, and then install the required number of shims to prevent spinning past zero. When the turret is reinstalled, you can line it up with the red radius bar so that you have a foolproof way of getting back to zero once the long shot has been taken.

One of the major highlights of the Vortex Optics Viper PST is that is comes with not one, but two, instruction manual. The first outlines how to use the scope, while the other goes into detail on how to use MOA and MRAD reticles. It is a great primer for shooters who are often left baffled by the calculations.

If there is a negative to be found on this scope it would have to be the hard plastic cover. It does the job it was intended to do, but a flip-up scope would definitely be preferable. This is really just being nitpicky, though, as the scope is generally a quality piece of equipment all round. At $699, you get a scope that comes with more features than other optics of a higher price point.