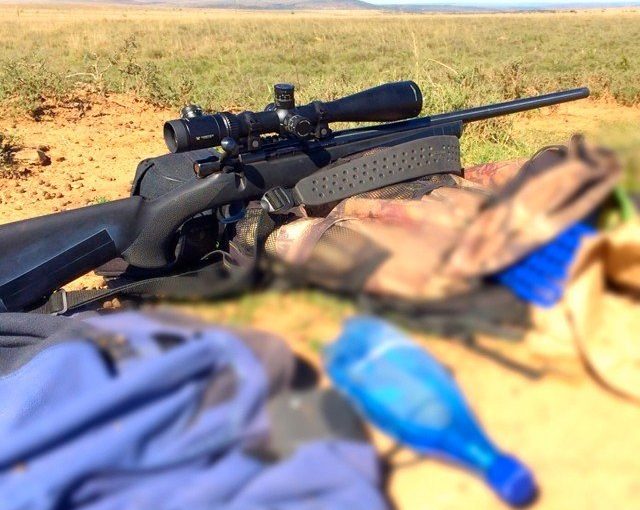 The Vortex Viper PST Rifle Scope has certainly make a powerful impressive with its combination of optics, durability and intuitive settings. While this particular scope has garnered a considerable reputation, does it really live up to the hype?

Using a Remington SPS Tactical rifle which features a 20” bull barrel, a picatinny scope mount, 180 grain Winchester silver tip ammunition along with X-Mark trigger from Remington, this scope was put through its paces. When prone, a hunting pack was used with a bipod held in reserve just in case. The rifle itself was zeroed at 100 yards to emphasize versatility at different ranges.

Admittedly, there will always be variables when using a rifle scope with different types of rifles, ammunition and settings, but overall it is a fair test of the scope’s usefulness when it came to engaging targets at different ranges. The exact unit being used is the Viper PST 30mm tube and the EBR-1 MRAD illuminated reticle. The turrets on the PST have the zero stop features and the reticle comes in MRAD and MOA configurations as well with the MRAD being chosen for this particular test. Here, the MRAD is the equivalent of 3.6” at 100 yards and each adjustment equals .36” at 100 yards as well.

A neat feature is the hash marks every ½ mil which helps make the reticle more user friendly when making adjustments on the fly, especially in windy conditions. At the current setting, a bullet would travel almost 975 yards without the need to make any adjustments on the scope to increase accuracy. Both the turret adjustments and the reticle use mils so making changes is simple and straightforward.

This means that when a target is moving or appearing at different distances, making the adjustments is relatively simple to get an accurate shot. A target that appeared at 300 yards under the current settings would require the shooter to raise it up 1 mil or adjust the scope up 10 clicks. Conversely, a target which then appeared at 350 yards would require an adjustment of 1.3 mil or 13 clicks up. This simple, intuitive system makes the PST relatively easy to use.

The differences between the Vortex Viper PST Rifle Scope and the Swarovkski are relatively few, but they are worth noting. The Swarovkski does not have a reticle that returns to a precise zero and it not quite as well suited for shooting in darkened or nighttime conditions as the PST. The ballistic reticle of the PST is simply better suited for hunting game or firing at targets that may quickly change position.

This is not to say that the Swarovkski is an inferior scope, but merely that the PST does excel in certain areas while the Swarovkski does in others. For the purposes of this test, the PST had more features that lent itself better to the conditions at hand.

In addition to being easy to use, the PST scope is also very well made with solid knobs that give out a good “click” sound each time an adjustment is performed. That way, you can hear and feel the new adjustment along with seeing the results. The solid construction means that with moderate maintenance the PST will continue to operate at peak efficiency for many years to come.

In addition, the top turret and magnification ring each have a fiber optic cable that provides an enhanced view under low light conditions which means that the PST is a great scope in overcast or twilight conditions. As compared to the Swarovski, the optics is quite good and makes the PST certainly on par with that remarkable scope.

Another great feature is the user manual for the Vortex PST which is well laid out and very easy to understand. In the manual, you can easily see how to adjust the magnification levels at the lower settings so that you can maintain the true mil or milliradian. This is especially the case when hunting in less than perfect conditions when the adjustments need to be minimized in order to increase the overall efficiency of the scope.

Save for the darkened conditions of nighttime, the PST scope should arguably never be used at less than 10x magnification for the best results when hunting. This is rather logical since most animals hunted at night will get much closer to the hunter, usually less than 100 yards, because they do not sense their presence as they would in daytime hours. It does help that the reticle is very well illuminated and does offer several settings that are specific for viewing at night. In fact, the reticle will actually shut off between brightness settings so that the knob can be used at specific ones instead.

Overall, the Vortex Viper PST Rifle Scope offers a number of advantages to hunters, particularly those in darkened or night settings thanks to the illuminated reticle. However, the sheer number of features and intuitive design has created arguably one of the most innovative scopes from the Vortex Optics line. The PST is one that is highly recommended thanks to its combination of versatility, optics and durability. The scope itself is also well suited for many different types of rifles and for hunters it represents the type of scope that works well in so many different conditions.

In addition, the construction of the scope and materials used means that it can withstand the elements quite well along with the typical bumps, scrape and drops that happen while travelling with the scope. The durability extends to the knobs as well with simple, straightforward adjustments that allow the user to properly hone in on the target at different distances in an intuitive fashion.

The Vortex Viper PST Rifle Scope is one that comes highly recommended and is arguably one of the best in its class and price range as well. For those who want a scope that allows a hunter to find their targets in a wide variety of environmental conditions, the PST is the one for you.